You Poop, Girl, and Freshen That Whiffy Butt!

You Poop, Girl, and Freshen That Whiffy Butt!

This may be the year of redefining Democracy in these United States, notably the approaching midterm elections and continuing anger and unrest in a.  divided nation. 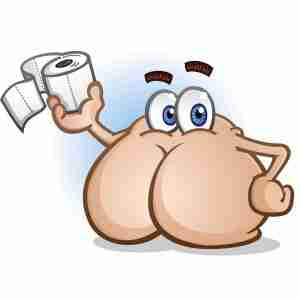 This is not about that. I’m seeing something else breaking in the winds of change with the prime-time television advent of pooping women, smelly crotches and whiffy butts.

It is being called, among other things, a shift in advertising to American women. Other descriptions of this phenomenon include terms like “anal programming” and “the conquest of odiferous orifices.” Okay, the last one is something I made up, but it covers the general message adequately and refers to an avalanche of television commercials by Lume (pronounced loo-mee). This is mild compared to language in some of the ads themselves which refer, for example, to “the stinky crevice,” which seemingly includes crevices fore and aft. This advertising breakthrough is already becoming the butt of jokes by comics and late-night talk hosts.

We’ve come a long way, baby, since the formerly offensive Ban Roll-On underarm antiperspirant commercials that repulsed some of the more squeamish among us in the 1960’s for trespassing on hallowed body ground. It’s surprising that it has taken so long to transition from underarms to butt cheeks, but that divide has now been crossed.

Dr. Shannon Klingman has no qualms about the adjectives she chooses to describe the targets of her odor-suppressing invention, including “bottom-half draft” and “lady bits” and “butt cracks” and the aforementioned “whiffy butts” and “chesticles.” The latter are essentially areas beneath the breasts. The most startling word in Dr. Klingman’s marketing arsenal is “crotch,” which leaves little room for misconception and is often used as a euphemism for more graphic terms. By the way, why is the word “fork” a preferred synonym for crotch in my thesaurus? The connection, it seems, is that a fork is also a divide, split or bifurcation as is the crotch on the human body. I’ll leave it at that.

One of the Lume ads states: “If you’re using your private parts all day, good for you!” Yes, our private parts have gone public on network TV ads, though I must say they still have more class than many of the political ads to which we are being subjected.

Probiotic ads for women are becoming more cringeworthy or straightforward, depending on your point of view, and the one garnering the most attention is the Garden of Life commercial with a woman sitting on the toilet and the “You poop, girl!” tagline. Lots of complaints about this on social media, but it does grab your attention, which is the whole point of advertising and apparently clears the FCC guidelines for accepted media language in 2022.

You might say it gives new meaning to expressions like toilet humor and potty mouth. But is it offensive and vulgar or just earthy and to-the-point?

History tells us that language that used to be acceptable, whether in advertising or common usage, has become unacceptable and inappropriate. And yet we can see in the preceding examples that what was once taboo is now tolerated. What better cultural landscape to explore our changing perceptions than American advertising?

We would never represent our fair ladies as pooping creatures in previous decades, and although men were depicted as their superiors and heads of their households, women were not the most inferior minority.

For instance, one print ad from the 1920’s, published some 60 years beyond the abolition of slavery, proves that white superiority was still acceptable (as long as it is presented behind a benevolent, patronizing façade). An early advertisement for Jello shows an immaculately dressed white matron sitting on the ornate porch of a plantation-type mansion as a young black lad presents her with a bowl of the dessert stating: “Mammy sent dis ovah.”

However, throughout the thirties, forties and fifties, the value of women was often affirmed by how well they served their men. A Kelloggs ad in the 1930’s shows an apron-clad woman embraced by her husband who is crowing, “So the harder my wife works, the cuter she looks.”

In more recent times, some advertisers have made the mistake of using sexism to sell their product and came to regret it. Mr. Clean was depicted as the housewife’s friend for years, but he went a little too far in 2011 in a print ad that showed him smiling benignly down upon a young housewife engaged a kitchen cleaning job as her young daughter looks on approvingly. The accompanying large type proclaims: “Get Back to the Job That Really Matters!” Not a male in sight in an ad more fitting for the fifties.

Body image has always targeted women more than men over were allowed to be fat up to a point, that is. For a man, plumpness was a sign of prosperity and success. Yet similarly overweight women were regularly disparaged. Even an animal rights group (PETA), as recently as 2009, ran afoul of women’s rights with giant billboards proclaiming: “Save the Whales. Lose the Blubber: Go vegetarian.” Depicted were a whale and the cartoonish figure of an obese woman in a swimsuit.

Cigarettes used to be cool when my parents were young. Even physicians recommended certain brands of what we came to call cancer sticks, as witnessed by this infamous tagline of the 1940’s: “More doctors smoke Camels than any other cigarette.”

They even used babies to sell cigarettes as they did in the 1950’s in an ad showing a wide-eyed infant with the caption: “Before you scold me, Mom… maybe you better light up a Marlboro.” Smoking parents and overflowing ashtrays were common in American households in those days.

Surely, most people knew that sugar was not healthful in the 1950’s, but the Soda Pop Board of America was  the reputed sponsor of a print ad featuring a smiling mother holding a happy toddler and offering the following advice: “Do your child a favor. Start them on a strict regimen of sodas and other sugary carbonated beverages right now…”

Had I not fact-checked further to learn more about the Soda Pop Board of America, I might not have learned that there was no such organization, and the authentic looking magazine advertisement, easily Googled on the internet, was a hoax. It is true that some doctors in the late fifties and early sixties did allow babies allergic to cows’ milk to be fed bottles of Sprite and other sodas once they were rendered devoid of carbonation.

Pooping, on the other hand, is a healthy activity and crotches, whatever their emanations, are almost always a necessity.