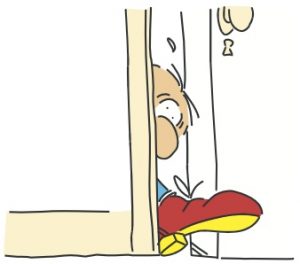 Your local contractor may be struggling to get his foot in the door for emergency relief.

There are a lot of things I enjoy about living in a small town, not the least of which is knowing most everyone personally or by reputation. If you don’t really know who someone is, there is someone you know who does. The same can’t be said of life in urban America. For one thing, we seem safer here from this pandemic, although maybe a bit too trusting or prone to questioning the seriousness of this global threat.

There isn’t much more that can be written about the pandemic and its impact on every segment of society, whether by age, race, economic status or profession. However, there is one group of industrious individuals who have become a valuable resource in my town and places like it, whether here in the Endless Mountains of Pennsylvania or the rural South.

In my hometown we are fortunate to have talented self-employed contractors and independent contractors who, at a competitive price, will do everything at your home or business from building an addition or remodeling your kitchen to roofing and siding. They are the proverbial Jacks of all trades when it comes to home improvement. They respond to emergency repairs that may include electrical or plumbing concerns. They are capable, experienced and qualified, if not necessarily accredited, in those specialties, but are not seen as “essential” when it comes to staying in business or being eligible for emergency financing during the virus crisis.

I’m referring to a number of talented guys who often work by themselves or with one or two sidekicks. If they are hired for a big job, they’ll take on an extra hand or two and, as Larry the Cable Guy likes to say, “git ‘er done.”

First of all, they are prime examples of the American Dream, because they work hard and make life better for many of us on the home front. Because they do not fit the government definition of essential, they have to shut down and hope there is enough in the bank account or IRA to keep their heads above water as we wait out this plague.

Technically, they aren’t even supposed to be out doing jobs for friends or in emergency response if any money changes hands. Doing this stuff for nothing is volunteering, and these guys, in my town at least, do a lot of that, too. One contractor told me the last job he did before being shut down was working by himself, as he often did, in a vacant nonresidential building. So much for social distancing.

Essential businesses (a.k.a. “life sustaining industries”) include news publishers and grocery stores, for example. In Pennsylvania, hunting and fishing are regarded as essential, but logging isn’t. Most kinds of food production activities are deemed essential, such as animal slaughter and processing, baking cookies and pies, as well as our daily bread, and, of course, candy. Most wood product manufacturing isn’t but pharmaceuticals are. Plastics manufacturing is in. Glass is not. You get the idea, and we haven’t even got to retail stores— most of which are out unless they involve food or presumed life sustaining provisions. Some states include liquor as essential. Others don’t. In some states, gun shops are considered life sustaining— in the event of an alien invasion, I suppose. Maybe it was the extra-terrestrials, lurking in outer space, who infected those infernal bats in the first place.

Note: Among the jobs declared essential are marijuana plant trimmers, bicycle sellers and repairers, financial planners and… Okay, it gets complicated. The point is that self-employed contractors are out no matter how bad your roof is leaking—unless the government requires them for something like converting a gym into an emergency medical facility.

Now there seems to be relief for this unique breed of small businessmen through the Small Business Association and its Paycheck Protection Program (PPP), with $349 billion to distribute from among 4,700 lenders (mostly designated community banks in these parts). These contractors can’t make a living unless they “turn rogue,” as one described it, by working on the sly and taking money under the table.

In the meantime, about three-fourths of that $349 billion was already spoken for via 1.1 million applications approved as of Tuesday afternoon, April 14th. It still isn’t clear how much of this relief is going to small business accounts, because of applicants who may qualify but are still doing okay, even great, because of the types of business they are in.

“Websites have crashed, phones are jammed and confusion reigns as businesses rushed at today’s (April 10) kickoff to get their chunk of the … Paycheck Protection Program,” according to Axios, a business news website, way back then.

It appears, the way the regs are written, that the banks are encouraged to favor preferred customers— the small businesses that have borrowed from them over the years. Bigger employers borrow more, and that makes a difference. It has an impact on who gets approved for relief and who doesn’t. The more independent and self-sufficient a self-employed contractor has been, in a way, the less chance he or she has of being as favored borrower.

Additionally, because it’s a first-come-first-served program, it means eligible bankers handling the applications are being inundated while they are still trying to figure out how everything works. As for the contractors, the little guys don’t have anyone on their payroll— a financial officer or accountant— who will help them sort through the application and required paperwork. There has been so little time to figure it out.

This relief program includes “small” businesses with fewer than 500 employees, which makes it a pretty big business where I live. PPP emphasizes utilizing relief funds to cover payroll, mortgage interest, rent and utilities, with loan repayments deferred for six months. If you are a contractor with no full-time employees, you have to go by your net profit.

The idea is to keep what employees they do have on the payroll until the coronavirus subsides so they can hit the ground running when the starting gates reopen. What about the self-employed contractors who have worked for years to establish a reputation and achieve a well-earned comfortable lifestyle for themselves and their families? They might have to bail out and scramble for some kind of income or resign to unemployment compensation, even welfare, while what used to be a profitable business dries up.

There was so little time to prepare when this hastily conceived program went down, and that has apparently eradicated a truly valuable resource in towns like mine during the spring of 2020.

So let’s not forget Erich, Adam, Hud, Josh, Chris or whoever your favorite contractor may be in your neck of the woods. If you have any expertise or information that will keep them in a business that has served us all so well, it would be worth the investment in your community. It sure would be nice to have them here, doing what they do best, when we get back to normal.

Make that the new normal.