Wildcats and Panthers and Wolves, Oh My!

Wildcats and Panthers and Wolves, Oh My! 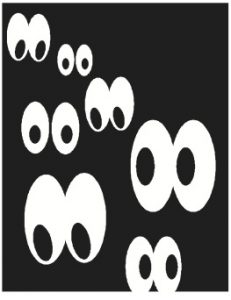 “I told you we shouldn’t be out here after dark!”

We seem to have entered a weird time of make-believe where stuff is made up by people who I’m not going to mention, because they wish things hadn’t turned out the way they did. That’s the way it is today. If we don’t like the way things are, we just pretend they aren’t and move on believing what we want to believe.

I mean who would have ever believed we’d be held captive for most of a year and well into the next one by an invisible enemy forcing us to wear masks and greet each other by bumping elbows and skipping in a circle? Well, we would have believed it had we paid attention to history. The same thing happened 100 years ago, and we didn’t believe it then either. Not the circle skipping part. I made that up, because that’s what I choose to believe.

For the most part, the history we learned (when they still let us physically attend school) was pretty reliable, but, then again, we had to take the word of dead people we didn’t know. That’s why historians are so important. Why? Because they apparently communicate with dead people, and we learn lessons from history that keep us from repeating the bad stuff.

For some reason we keep repeating it anyway.

I come to you today with some legitimate history— much of which might seem unbelievable. It describes events that actually happened here in Bradford County, PA, and, no doubt, in other environs much like ours more than 200 years ago.

We have our problems today, but we seldom worry about being devoured by wolves after dark. So if you think 2020 was bad, harken to the Journal of John Shepard describing the hard and snowbound winter of 1814-15 here in Bradford County:

“The wolves were driven down from the mountains in search of food and many sheep were devoured by them. They could be heard howling at all times of night. The inhabitants were much in fear of them and were afraid to pass from Milltown to Athens, even in the daytime. There was no traveling after dark, so great was the fear and danger… Bears and panthers were sometimes seen between the rivers. Bounties were offered for killing these animals and those that were not killed retired to the mountains.”

In 1816, summer failed to appear in Bradford County. Guess you might call it a summer vacation on vacation. It was called “The Year Without a Summer” because they weren’t good at making up colorful slogans in those days. There was killing frost every month of the year, including July and August. Coincidentally, the typically coldest months on the year— January and February— were unseasonably mild. March was described as “cold and boisterous” and though early April promised a mild spring it grew colder as the first full month of spring progressed, ending with snow, ice and freezing temperatures. Here’s a description in a chronology of that year from an issue of The Settler magazine:

“In May ice formed half an inch thick, buds and flowers were frozen and corn killed. Frost, ice and snow were common in June. Almost everything green was killed and the fruit was nearly all destroyed. July was accompanied with frost and ice. In August ice formed a half an inch thick. A cold northwest wind prevailed all summer. Corn was so frozen that much of it was cut down and dried for fodder.” There was frost and ice in both September and October, through the first two weeks of September were perhaps the mildest of the year. There was plenty of good sleighing in November, thanks to an abundance of snow, but, believe it or not, December was unusually mild and described as “comfortable.” However, the toll of the year was near famine for the farmers and 1816 was remembered for decades as “eighteen hundred starve to death.”

Like I said, they weren’t that good at making up names. Then again, it’s hard to be inventive when you’re on the verge of fainting from hunger.

In 1816, Bradford County paid out $264 in bounties for wolves killed and an additional $136 for panthers taken. That would be approximately $6,800 in today’s money. The county bounty for bagging a wolf was $12 or about 190 of today’s bucks. Obviously, wild animals, especially predatory ones, were so plentiful as to be deemed threatening to unarmed and unaccompanied humans.

In that context it is easier to understand the Big Hunt of 1818. Contending with uncompromising weather of the second decade of the 1800’s, including that severe winter of 1814-15, the year without a summer of 1816 and the winter of 1816-17, the cruelest and harshest winter in almost four decades. The famine conditions at the end of 1816 would make that winter cruel enough, but winter temperatures were described as fatally cold. Even the rapids in the streams and rivers froze solid, with wood piles being consumed at alarming rates.

Historian Clement Heverly’s 1914 account of the Big Hunt of 1818, as reported in the Bradford Star, might seem a tall tale if you didn’t know about the glut of wild beasts throughout the countryside and the surly mood of the farmers barely surviving some tough years. Surly, you jest? Who wouldn’t be? The animals and weather had wrought havoc on their crops and unguarded food stores, with wolves, bears and panthers slaughtering and devouring their livestock.

It was advertised as a general hunt and posted for publication as far away as Wilkes-Barre. Posters about the hunt were tacked up throughout the region in anything that would remotely qualify as a village or town. Col. Aden Stevens, who settled in what is now Stevensville in the 1790’s, organized the big hunt and set the date for December 4, 1818. There were two huge hunting parties— one to fan out within 100 square miles of eastern Bradford County from Wysox to the mouth of Wyalusing Creek and the other the entire triangle between the Chemung and Susquehanna Rivers that rose above the state line. The bulk of the hunting grounds were described as dense wilderness. Each territory was marked off with a circular area a mile in diameter near the center into which all the game was to be driven. Each of the two circular areas contained a gently sloped knoll or hill.

An estimated 900 hunters, all armed with guns, axes, spears or pitchforks, responded. The two armies of hunters started almost simultaneously at eight o’clock with a blast from a horn in Wysox repeated along regularly stationed detachments. There were tales of hero hunters slaying wolves, panthers and bears in their march through the thick woods. But the key was to drive the animals into the compact circle until they were surrounded by an unbroken line of hunters. The entrapped snarling wolves, pissed off panthers and growling bears, along with some really confused deer, had literally been herded to their doom.

Heverly describes what happened at the climax of the Big Hunt in the north thusly: “In the indiscriminate fire that began in this corral, it is a wonder that many of the hunters were not killed. The killing of game lasted about two hours, upwards of 30 animals being slaughtered and probably twice that many escaping.”

This colorful account describes just one of the hunting parties, the Athens-Chemung Company. The hunt in the eastern part of the county claimed a count of 150 deer alone, as well as 50 wolves, 15 bears and “a great number of foxes.” Dressing and disposing of the game required most of the hunters to stay throughout the night in the wilderness before returning to civilization with the meat and skins.

This was apparently a replay of Great Hunt of 1805, which took place in June of that year with the express purpose of “ridding the country of destructive wild beasts.” An estimated 600 hunters were involved in this hunt, forming a circle 120 miles in circumference and then closing in on their quarry. Hunters were armed with flintlocks, so every shot had to count when cornering panthers, bears, wolves and wildcats. Each was advised to carry a hatchet and hunting knife. Two days of provisions were allotted to each, so it was an extended hunt indeed. The results were amazing, and deer were not even counted, if killed at all.

So the history lesson is that we had the means to defeat a common enemy then. We can do it again in 2021. Happy New Year and stay safe!