What’s So Bad about Being Alone?

What’s So Bad about Being Alone? 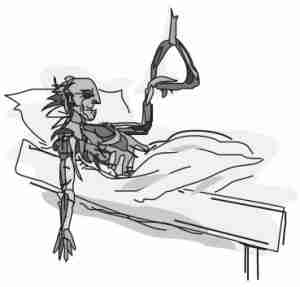 Don’t be lonely too long or you might not have long to be lonely.

Only the lonely know the way I feel tonight…— Roy Orbison

Are you lonesome tonight? — Elvis Presley

Synonyms for loneliness and being lonesome include desolation, forlornness, reclusiveness and friendlessness. Just being alone doesn’t make all of us lonely or longing for companionship. Sometimes it can be quite pleasurable after a chaotic day dealing with people in both the real and virtual world. Others understandably seek isolation the day after hosting, even attending, a family Thanksgiving feast accommodating two people for each square foot of floor space.

Some people prefer being by themselves, and that seems to be increasingly the case since the pandemic. I know we seem to be blaming a lot of our problems on the pandemic lately, but you must admit it got most of us accustomed to being alone. When we did venture out, we did so, masked like felons, at our own risk.

It seems that the more ways technology has given us to communicate with each other, the more we are left with just ourselves as company. Everyone from kids to young adults—normally the most social among us— are shunning the company of others and social mingling, deferring to devices promoting virtual reality, memes and faceless conversations with other texting loners.

Apparently, there are physical, mental and emotional repercussions to living alone, according to a report in the British daily newspaper, the Financial Times, published while Americans were celebrating the aforementioned holiday known for togetherness and expressing thankfulness for those around us and, of course, the food quickly cooling in front of us.

“When we live alone, we are more likely to engage in unhealthy behaviour, such as smoking or eating badly, because no one else can see,” wrote Federica Cocco, author of that report. “Studies show that people who live by themselves are more likely to suffer from alcoholism, high blood pressure, insomnia and weak immune systems.” (Since this was a quotation, I kept the British spelling of behavior in deference to their seniority as speakers of English.)

There has been a steady increase in hours people spend alone over the past decade, according to the same source, and a decline in people who say they have friends or relatives they can count on. Hey, everybody, knock off the pity party and get over it! (You know I’m serious when I use an exclamation point.)

This is supposedly a worldwide thing and not just a phenomenon in the United States, but I’ll stick to the latter in exploring the reasons for our growing compulsion to be alone and all its unhealthy effects, according to respected psychologists. Health concerns include the following: as bad as smoking 15 cigarettes a day, worse than obesity, increasing the risk of high blood pressure and heart ailments, a risk factor for depression and, ultimately, greater risk of death. For the older among us, they say, social isolation increases the risk of dementia and other cognitive decline.

I’m not sure I buy all of this, but it has led to an international movement called Campaign to End Loneliness. As with most health concerns, loneliness is especially hazardous to those of us among the older population. As for my recently entered age group (75-84), as many as half of those who are 75 and older are living alone and subject to feeling lonesome tonight, perhaps every night. I do not live alone, because I share my domicile with another old person, my wife, who is still some seven months away from the age of 75. Most of a typical day for us is spent not being alone. We often devote large chunks of each day in the same room without saying much, if anything, to each other. The important thing, I suppose, is the opportunity is always there to communicate and share our feelings. After almost 54 years of marriage, we pretty much know how each of us feels about any issue, but sometimes those thoughts bear repeating, if only to reassure each other that senility has not yet set in. We believe it is better to repeat yourself than not being able to remember what to repeat.

We are both quite healthy and physically active and not among the growing number of our peers who are alone due to spousal loss, which seems an antiseptic term for losing someone you love. We’re also social people who do many of the things we do together when away from our home.

I guess the thing that got me thinking about all the people who might be lonesome was a Washington Post article published the Saturday after Thanksgiving which reported that, and I quote: “Americans spent 38 percent less time with friends and extended family over the Thanksgiving weekend in the past two years than they had a decade prior.”

There has supposedly been a big change in the hours people spend with friends and extended family since 2013, which means that this movement toward isolation began years before COVID-19 did its damage. Perhaps more telling is that in 2014, according to the Census Bureau’s American Time Use Survey, the market penetration for smartphones reached more than half of our population. It is indication that the more we turned to these devices, the less we turn to each other for face-to-face companionship. Then Covid crept in and isolated us even more. The same study tells us that a decade ago, the average person spent 15 hours a week with friends, which included neighbors, to only 10 hours in 2021. The assumption is that trend has continued, and although those numbers may not seem that impressive, consider that, based on those numbers, each of us is spending at least 260 fewer hours each year with other people than in 2012.

The trouble with studies and surveys is that we all become that typical American, and it doesn’t necessarily apply to you and me as individuals. As for me, I’ve been fortunate not to suffer through any sieges of isolation. If that time comes, I hope to have a lot of memories to sustain me and cheer me as long as my aging brain continues to share them.