Trying to Stay Relevant with an Aging Mind

Trying to Stay Relevant with an Aging Mind 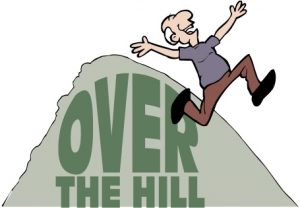 Words and phrases that show your age. Uncool or rich in history and meaning?

Now I’m too old to worry about whether I’m cool or not. Or is that too cool to worry about how old I am? I do know that it is still cool to use cool to mean something is, well, cool. It is one of the long-standing tidbits of slang that has lasted through multiple generations. Then again, that may not be true in 2022. This word has transitioned from describing a comfortable temperature to a calm composure to hipness and just about anything that’s good or meaningful. Hipness, which Mirriam-Webster tells me was first used back in 1937, seems to be holding its own, though showing signs of aging with “hip” already on lists of outdated words. By the way, it appears that high five has been replaced by the elbow bump. Chest bumps and head butts are reserved for athletes. I’m not even going to bother commenting on the term “head butt” and the images it provokes in my decrepit mind.

It’s weird, but a cartoon theme song from my adolescence, which must have had its few moments of coolness among young’uns in the sixties, popped into my head the other day:

Wally Gator is a swingin’ alligator in the swamp.

He’s the greatest percolator when he really starts to romp.

There has never been a greater operator in the swamp.

That snippet of song (as I remember it) gave birth to the theme of this blog, which is essentially words and phrases that show our age and consign us to irrelevancy. Take Wally Gator. Cool people aren’t swingin’ nowadays and operators, even smooth ones, aren’t cool at all. Never mind that percolators aren’t used to make coffee anymore. “See you later, alligator,” emerged from the 1950’s and is one of the pioneering lyrics of rock ‘n roll. If you still use that as a parting phrase, you are a relic. Archaic phrases, however, may come back as retro, so keep it on the back burner with the rest of your formerly cool vocabulary.

There are plenty of formerly cool words now on the trash pile of lingo. Come to think about it, lingo is one of those words. How about spiffy and swell? I occasionally use the word “swell” when someone asks how I’m doing, because it always brings a comment like, “Swell? I haven’t heard that in years.” I was hoping to revive its former popularity, but it doesn’t seem to be working. I remember my mother telling me in days of old how spiffy I looked in a new suit.

So what are some of the other outdated words and phrases guaranteed to show your age and destroy any semblance of coolness you may have left?

If you think someone is funny, a laugh riot, you might be tempted to say, “You’re a real card!” Don’t do it— unless you’re actually playing cards with peers in an old folks’ home, which is itself an outdated expression. “Folks,” by the way, refuses to die as a synonym for people, but it is mostly used by older adults, country singers and in an occasional advertising slogan.

There are some words no longer relevant due to changes in technology like “mobile phone,” “videotaping” and “rolodex.” Changes in fashion have rendered words like “dungarees” and “slacks” and “galoshes” and “pocketbook” as no longer appropriate in contemporary conversation and could make you a laughingstock on Facebook. We have enough laughingstocks on Facebook. A pocketbook isn’t something that fits into a pocket like a wallet. It is full of pockets, nooks and crannies containing items you forgot you ever had, including that fake ID you used back in college. Wallets are still okay, but “billfold” is bound to perplex anyone under the age of thirty. Make that forty.

It is okay to address both women and men or both genders together as “guys,” but you probably shouldn’t refer to any female as a “gal” unless you’re doing a community theater production of “Oklahoma!”

Another word that enjoyed a brief reign as a substitute for cool was “dope,” which was still acceptable among the young as recently as 2015, but, as is too often the case with slang that emanates from the hip hop culture, it died a painful death once uncool white people started using it. That happened before with “bad” as a substitute for cool or good. Using the expression “bad actor” is definitely bad. I mean not cool. There are other meanings of dope that cease to exist in modern vocabularies. There is the dope that was smoked, straight dope as in reliable information and a dope who lacks intelligence.

When I was in Vietnam in 1967-68, the word “groovy” was used liberally among stoners who preferred pot to mellow out. Groovy is outdated, unless used sarcastically, and, interestingly enough, it was actually popularized back in the 1920’s jazz culture in reference to “finding your groove,” which itself referred to the groove on a vinyl record.

Now there are words I really like that are sorely missed because they were fun to say. My father, who was averse to cursing, would say “Fiddlesticks!” in such a way. It didn’t offend anyone because you didn’t really know what it meant, but it worked for him. Another fun word cast aside as something only old folks say is “whippersnapper.” A whippersnapper was someone who was young or, as the old saying went, “wet behind the ears.”

And that brings me to a brief recount of other phrases and expressions declared over-the-hill (another phrase on the endangered list), outmoded and even hoary (ancient but venerable).

The reason some of these expressions have bit the proverbial dust is because they were so popular in the first place and eventually discarded as clichés.

For instance, doing something spontaneously was said to be done “at the drop of a hat.” We just said it without much thought about its literal meaning. It seems that instead of firing a starting gun to start a race around the turn of the 19th Century, runners took off at the drop of the starter’s hat. It saved ammunition but took its toll of hats. Further research tells me it was probably used in horse races, because the crack of a gun nearby could give a horse a heart attack.

It doesn’t take a genius to figure out where “close but no cigar” came from and why it is considered antiquated. It makes no sense to people who have never been to a carnival or county fair and played the games along the midway. It is a reminder of another rural expression, “Close only counts in horseshoes.”

And since I’m on a roll with horses, I must tell you that you are getting this valuable information “straight from the horse’s mouth.” It merely means a horse’s mouth is a teller of truth, because if you are buying a horse and concerned about its age and health, you just open its mouth and look at its teeth.

Just because something goes back into antiquity and seems to make little sense literally, doesn’t stop us from using it. Such is the case with the expression, “Take it with a grain of salt.” In other words, you are not quite sure whether something is the whole truth and nothing but the truth. This goes back to ancient Rome when a grain of salt was recommended as a digestive aid. In other words, you’re not going to swallow it without a grain of salt. That would be the salt of the earth, of course.

Whether or not you agree these words and phrases are outdated, antiquated an uncool in these times, the stories behind them can be fascinating.