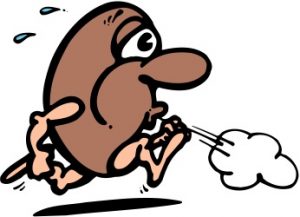 Potato alert: Get off the couch to enjoy better health.

Aging seems to be the only available way to live a long life.— Daniel Francois Esprit Auber (1782-18710

I crossed the line on Tuesday of this week. Furthermore, I shamelessly confess that I took a giant step backward at a crucial time in my life. But it’s all good. Sometimes, when it comes to protecting, even regaining, your health against the tide of aging, going back is a good thing.

On Tuesday of this week, I was officially notified by my family physician that I was no longer a diabetic. I’m not even a pre-diabetic. It’s been quite a trip from almost three years ago, riding a crest of salads and other healthy foods, and weaning myself from all the hidden sugar and sodium in most processed foods. The biggest part of the miraculous drop to a 5.0% A1C was stringently following the Mayo Clinic-approved DASH (Dietary Approaches to Stop Hypertension) Program and a regular exercise routine.

It was about three years ago that I learned that my blood glucose level or percentage was approaching, if not already at, 10%. This is the percentage of blood sugar coursing through your veins measured by what is known as the A1C, which is not the same as the numbers diabetics are given in their daily blood testing, which may vary from day to day depending on your diet and activity, or lack thereof. When you are diagnosed as a Type 2, you are usually prescribed one of what seem to be limitless number of medications you may have noticed in all those television ads. The purpose is to maintain and stabilize with the primary goal of not crossing into the more serious territory of Type 1, which requires insulin and is almost always a lifelong condition.

My late father-in-law, who was on insulin from his fifties on, used to joke that he was plagued by “a terminal disease.” It was true, and when he did die from heart-related issues in the hospital in his late seventies, the diabetes was the primary culprit that kept him from escaping his critical condition. You can manage diabetes at this stage with insulin and a strict diet protocol, but once you’re there, you usually stay there. The unfortunate rule is that insulin injection or oral intake will be part of your daily regimen until you die, which often arrives sooner because of the diabetes.

Naturally, I took the news that I was a diabetic very seriously. I had recently reached my seventies and I prided myself on not being on prescribed medications. I had battled being overweight and, frankly, obesity, from much of my adult life with mixed results. It was a metabolism I inherited from my mother who could subsist on almost a starvation calorie count and drop nary a pound. I remember her quietly crying in her room when I was a kid in frustration over her inability to lose weight. It likely led to circulatory disease, notably phlebitis, which was a constant threat to her health. She did live into her eighties, but there were a lot of things requiring physical exertion she was unable to do most of her adult life.

It may have been partially because of her, but I was pretty active physically from my twenties on. I was running several miles a day, along with other exercises, and I was something of a student of nutrition, if not dieting, itself. Nutrition— the concept of what constitutes a healthy diet —changed over my 50-plus years so far as an adult. I later came to learn that my mother, by denying herself things she would have loved to eat, was unconsciously signaling her body to go into starvation mode. The more she denied herself, the more her body resisted giving up its fat cells leading to insulin resistance. Then, when especially frustrated, she would be overindulging in food she shouldn’t be eating. With four children covering an age span of eleven years, there was all kinds of stuff in the fridge and the cupboards to tempt her, and with that came the guilt, embarrassment and self-deprecation that made her feel even worse about herself.

I don’t know any of this as fact, other than the self-denial, because my mother was generally a happy and positive person with a great sense of humor and a loving nature. There were no clinical signs of depression that I can discern as I look back, but I know it must have eroded her self-esteem. I’m not even sure of what medications she may have been on, especially after I, as the eldest, left the family fold to face similar challenges.

My father, a human dynamo who seemed unable to sit in one place for more than five minutes, never had to worry about gaining weight, let alone being overweight. Yet he always regarded Mom as the most beautiful woman in the world, and I never heard him say anything that might be regarded as critical of her weight or appearance. That is a gift every person hampered by obesity should receive from his or her spouse.

It sometimes seems that Americans are too obsessed with weight and diets. We should be but too often, it seems, for the wrong reasons. Too often the motivation is wanting to look good in a bikini again or the re-emergence of those muscles you once proudly flexed, but the most important motivation to lose weight is to remain as healthy and independent as possible as we move through the stages of life. There is no question that appearance and compliments about how good you look can make you more determined to keep the diet going. My feeling is we’re only allotted so much time on this earth and it is up to us to get the maximum we can out of our allotted lifespans.

The most we can get may seem like too little at times. I think of the case of Jim Fixx, who is credited with starting the running explosion of the 1970’s with his book, “The Complete Book of Running.” For all of us who bought into distance running as the keystone exercise of our exercise regimen, his death at the age of 52 in 1984 was a tragedy, as it should be. He could be credited with helping transform a sedentary nation into a more active and physically fit one. Fixx died of a heart attack while running, and it gave rise to the expression: “Live fast, die young, leave a good-looking corpse.”

For those who resisted the idea of running any distance greater than the jog from their easy chair to the refrigerator, it was the opportunity to laugh up their sleeves at local growing army of people in colorful tracksuits flashing their Nikes and Adidas on the roadways. Fixx may have been only 52, but how long would he have lived had he not been in the shape he was in? Get the most out of what you’ve been given, and that also applies to what you choose to eat.

So I was flattered by my physician’s incredulous announcement: “Congratulations! You have gone from being a diabetic to a non-diabetic!” I had literally cut my A1C in half, and it made me even more determined to take on one other threat to my health and lifespan. The DASH diet has been proven effective for reducing high blood pressure and weight loss. Healthy weight loss shouldn’t be fast, and, for me, it has been two or three pounds a week so far.

I just wanted people to know that vanquishing health threats is always about a prescription. I’ve been given a three-month reprieve to continue the drop in my blood pressure before a decision is made on that issue. All you can do is the best you can.

My mother may have lost her weight-loss challenge, but she certainly remains a motivation for me. Aging brings with it graduation deterioration, whether it is a machine, the roof of your house or the human body. You can’t stop it, but there are things you can do to make it longer and less invasive.