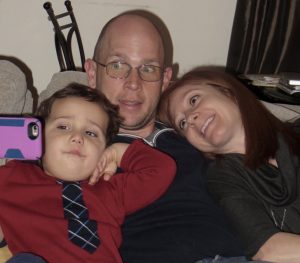 Jeremy with wife, Karen, and nephew, Ben. Learning strengths of being a survivor.

September 11th seldom passes without notice in our household, which has dwindled to an elderly couple in an empty nest. We were 19 years younger, still adjusting to the youngest of our two kids embarking on a career after college, when our world was rocked— mine while covering my news beat at the county courthouse and my wife in her classroom at the local elementary school.

It was all over the television when we both, excused from our respective duties, made it home on a sunny Tuesday— Mary relieved by her principal that morning and me a few hours later on a busy news day for a weekly that would be laid out and subsequently forwarded to the printing press the next day. Our son, Jeremy, worked in one of the towers of the World Trade Center.  We would both see both towers collapse in the wake of horrible fleeting images of people jumping from the upper stories of that tandem of 110-story buildings, which had been struck, respectively, in the vicinity of floors numbered 93-99 and 78-84. There was a lot of confusion at the time, but we knew that Jeremy was working for a marketing firm as a data analyst in the second (South) tower struck. He was about halfway up— around the 55th floor, we recalled.

That meant that he shouldn’t have been in the direct path of the world-shaking collision and resultant inferno— or in those 20 to 25 floors above the impact. They had no way out. Fortunately, there weren’t as many people working in the top few floors (especially in the North Tower) or the total death count would have been much higher than the 2,763 who failed to survive the Manhattan tragedy. Many families of those who were ensconced in the World Trade Center on the morning of September 11, 2001, had to wait hours and, in some cases, days for those who didn’t make it, to learn the fate of their loved ones.

Many with cell phones couldn’t get their calls out to notify friends and family that they were all right or, in many cases, making harrowing escapes down the stairwells of their buildings. The cell towers were obviously jammed with signals to and from that sector of the city, and many couldn’t get through until after the dust had literally settled. Jeremy went to speed dial and just kept hitting it again and again, getting through once in a while to the newspaper where I worked and to his grandparents. So we knew relatively early after the South Tower strike that he was alive, with several critical updates that he was descending the stairway and, ultimately, that he was out of the building and several blocks away when the tower he had vacated minutes before it was transformed into rubble. It remains an indelible visual that remains etched in the national consciousness.

Meanwhile, the surreal drama was playing out for Jeremy and his co-workers. There had been some debate among them in the aftermath of the plane flying into the other building, which they witnessed in mute astonishment. Was it a freak accident?  There was an announcement advising people to stay put to avert a mass panic, but their conclusion as a group was to quietly and calmly exit down the stairs. Other offices were reaching the same conclusion. He remembers it being remarkably orderly, with people, himself included, helping people in wheelchairs and with limited mobility down the steps. They were only a few floors into their descent when the entire massive building shuddered from the concussion of the second plane smashing into the South Tower about 25 to 30 floors above them.

And even then it was as if everyone knew they must keep their cool, not betray panic that might spread like a contagion. At some point, somewhere in the last half of their downward journey to ground level, they saw the firefighters and other first responders heading up as they were coming down. Jeremy remembered those faces for a long time. He probably still does, but he doesn’t talk much about that part. It became apparent to him, in the following days, that many of those determined faces most likely didn’t make it out of the building alive.

First Responders Pay with Their Lives

About 400 of those 2,763 extinguished lives belonged to firefighters and paramedics (343), New York City police officers (23) and Port Authority Police (37).

One of Jeremy’s most vivid memories, as they reached the ground floor and eyed the exits where there was a blur of human bodies dropping to the ground outside, was a uniformed policeman suddenly appearing and motioning the group to follow him. To him it was something like a guardian angel sent just for them. They obediently followed, still numb from the ordeal, through the subway. It must have been several hundred yards, and then they emerged at street level a few blocks away. At some point shortly thereafter, he turned to watch the South Tower lose its stately form and crumble, releasing a storm of dust, smoke and ash through adjoining streets like floodwaters gushing through a canal. Ghostly figures, barely visible in the darkening storm, walked, stumbled and ran to safety with their backs to the devastation.

We got his last message at about that time, and, of course, were relieved, to put it mildly, that he was among the estimated 9,000 survivors. We had not only been spared the death of our son but the stress and suffering we would have likely endured had we not been so promptly apprised of his progress.

Our daughter, Pam, wasn’t privy to the happy ending of her brother at that point. She was working for a financial firm in an upper floor of another Manhattan office building, her window facing the scene where she witnessed the horror in real time. I don’t remember how or when she found out he had survived, but it was probably from us a couple of hundred miles away.

Jeremy wouldn’t go back to the scene for years, even when a memorial was constructed at ground zero 10 years later on September 11, 2011. He was somewhat haunted by those faces that responded to the scene that day. I guess that’s a form of survivor’s guilt. His mom always calls or messages him on that anniversary day, and she texted him last Friday to tell him, among other things, “how grateful we are that you are here today.”

He was on a morning walk near his New Jersey home early that morning and “just thinking about how drastically different this morning is, in so many ways, from that morning,” he reported. He’s living a good life and a number of milestones have followed, including falling in love, getting married and starting and building a successful business. He is also seeing that being in the midst of something so catastrophically deadly and evil can make you a better person and give you a greater appreciation of what it means to be a survivor.

“I’ve learned over the years that it’s an important part of the cleansing process,” he texted to his mother Friday morning, September 11, 2020. “You can’t ignore it and it’s good to remember. But very thankful for everything surviving that day has allowed me to do.”

As a nation, this communion of grieving and unity gave us a short-lived appreciation of the sacrifices of the heroic and the kindnesses of strangers. It didn’t matter whether you were Republican or Democrat, liberal or conservative. We were Americans and we were all in this together. It’s a lesson we forgot much too soon, and what better time to appreciate being a survivor?