Starting Out at the End of an Era

Starting Out at the End of an Era 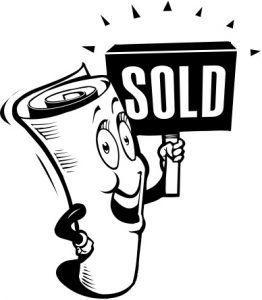 The story of Grit, a newspaper that accentuated to positive, is a combination of triumph and tragedy.

If you are around long enough, you might become part of history, something that was special to thousands — and, in my case, hundreds of thousands of people across the country. For me it was Grit— a nationally circulated weekly newspaper. I was hired as a reporter/writer there in the late summer of 1972. Note that it was Grit, not “The Grit.” All employees, reportedly at 250 when I was there— not counting correspondents and an army of kids delivering the paper in their respective towns— were adopted into “The Grit Family.”

We didn’t just have a bowling team. We had our own bowling league.  Then there was the softball team, the formal banquet and dance just before Christmas in the elegant Genetti Hotel and summer get-togethers.  I didn’t realize I was experiencing the end of an era.

It was a memorable time in Williamsport, PA. Not just because it was the start of a career in journalism and writing, but it is where we purchased our first home, where our daughter started school and where her younger brother was born.

There were two separate editions of Grit every week. The best-known was a weekly tabloid distributed nationally, with a circulation peaking at 1.5 million in the late sixties and early seventies, and self-proclaimed as “America’s Greatest Family Newspaper.” It was a unique publication that chose to reach out to small-town and rural America with adolescent news carriers selling and delivering the papers for a few cents each, as well as pursuing the incentive of winning prizes for their efforts. An ad in a 1975 issue of Grit displayed a photo of a boy with the distinct “Grit” cloth delivery bag and the heading: “I became $5.22 richer in less than 2 hours.” In another half-dozen years, six decades of Grit Carriers would come to an end.

Grit Carriers over the years included the likes of Astronaut John Glenn, “Singing Cowboy” Gene Autry, Colonel Harlan Sanders, the fried chicken mogul, and even country music icon, Loretta Lynn. Several generations of youngsters delivered the Grit until it was sold in 1981 and eventually transplanted to Kansas with a new editorial philosophy but a continuing appeal to a rural audience as a bimonthly magazine catering to farmers, agronomists and gardeners. A typical of cover story of the successor, now under its third corporate owner with the Grit name, was “Use Reclaimed Materials to Build a Chicken Coop” enhanced, of course, by chickens in vibrant color.

During the heyday of the national tabloid, credited as the first newsprint publication to include processed color photos and ads, there was only one other product for which Williamsport was better known: Little League Baseball. It started there, and the Little League World Series continues to be played and telecast nationwide in nearby South Williamsport on acreage donated to the world’s most popular youth sports organization by the Grit Publishing Company in 1958.

Indeed, its readers did love this tabloid which provided front-page news coverage brimming with optimism, entertaining down-home columns, cartoons, puzzles, pulp fiction and a wide variety of feature articles with a positive human-interest slant. Even the news accented the positive and was comprised of rewrites of dispatches from the Associated Press wire and clippings from newspapers all over the country. One full-time newsroom position was allocated for scouring subscribed newspapers and clipping out articles with an eye toward items that would remain timely for at least another week. They would be meted out to writers who performed what we jokingly called “editorial renovation” to produce a rewrite in the upbeat Grit style.

The words of German immigrant Dietrich Lamade, who founded the Grit in December 1882, tellingly define the philosophy behind the publication: “Let us avoid showing the wrong side of things and making people feel discontented. Let us do nothing that will encourage fear, worry, temptations or other forms of weakness.” The motto of the Grit was “Ring the Joy Bells of Life,” and we could turn bad news into better news even during the beleaguered waning weeks of the Nixon administration.

The Lamades are proof that every family, no matter how successful or respected, experiences tragedy somewhere along the way. One of the founder’s sons, George R. Lamade, on a hot August night in 1965, died by his own hand of a gunshot wound in his Williamsport home, as Little Leaguers vied in bracketed play for a world title on the field named after his late brother, Howard J.  Lamade. The 71-year-old Grit publisher, who had been in the family business for about 48 years, was reported to be “in ill health at the time,” the only explanation for the tragedy posited by the county coroner.

I got to cover a number of those World Series games, the highlight being a brief encounter with Joe Dimaggio beneath the bleachers.

The national edition was also known by some back in the day as “The Pennsylvania Liar,” probably due to its rosy outlook and its propensity for telling tall tales. Many who remember Grit and lived elsewhere in the United States were no doubt unaware that there was another Grit which, with a few exceptions, has vanished from existence, if not from the memory of those who relied on it for local news coverage.

Although the national and Williamsport editions were separate publications, the editorial staff worked on both and, as one of them from 1972 into 1979, I can attest that we regarded the latter as serious journalism and a source of pride. In many ways, it was a perfect place to learn the trade. The local edition covered the events and government of Lycoming County and its municipalities and school districts, as well as the courts, crimes, fires and accidents, high school and college sports and, of course, feature reporting that didn’t necessarily require a positive spin. The local Sunday weekly had become a respected newspaper which included news analysis and investigative reporting and, in its last decade at least, was truer to the tenets of journalism than many regional daily newspapers.

The management of Grit, encouraged by Executive Editor Terry Ziegler and Managing Editor Mike Cummings, oversaw what might be called a rebirth of real news reporting and serious journalism for the local newspaper in the 1970’s. At the same time, the national edition struggled to retain readership.

Bylines were handed out for exemplary news stories and feature articles, which dissolved the anonymity of reporters and made us personally responsible for our reporting. Each of us had a pen name because they didn’t want us to go overboard with more than one byline. If I had two articles deemed worthy of bylines, I got to choose which was bylined with my real name and the other credited to my pen name, Harvey Schoonover. That byline policy was also adopted for full-length original features in the national edition, but it was too late to entice younger adherents. Circulation continued to plummet throughout the 1970’s due to its reliance on older readers. The readership of the nationally circulated Grit was literally dying off. It was down to 1.3 million when I left in 1979, while the Williamsport edition maintained its audience at somewhere over 40,000.

The local Sunday paper was different, and a team of young journalists relished the opportunity for real reporting and writing. It was there that I was assigned to investigate claims that a young man named Kim Hubbard had been falsely and maliciously prosecuted for murdering a 12-year-old girl. The result was an investigative series that ran for five weeks in the summer of 1977 that also attracted other news media to the case, including the Philadelphia Inquirer, the Harrisburg Patriot and a publication, The Weekender, which dedicated several editions to the case in March of 1980.

All these years later, I am in the final stage of writing a book with this unique murder case as its centerpiece. It is also a generational story about some of the main characters and their lives before and after. I contributed to the website about the case created in 2013, Kim Hubbard: The Real Story. If you’re into true crime, you might want to check it out.

We moved from Grit and Williamsport in the summer of 1979 when I took over as News Editor of The Daily Review in Towanda after I learned the days of Grit were numbered. Two years later, the national Grit, its circulation hovering just above 700,000, was sold and moved to Topeka, Kansas. The local edition continued publishing, surviving until 1991 as the Sunday newspaper for the Greater Williamsport Area.