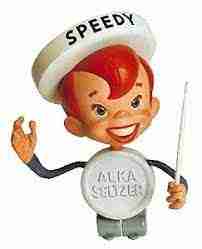 Here’s what you do. You walk up to somebody and ask, “Whatever happened to the Doublemint Twins?” If the response is, “The who?” you know you are significantly older than the other person or the latter has the memory of a sponge.

And it doesn’t have to be the Doublemint Twins. You could also ask about Speedy Alka-Seltzer or Bucky Beaver. Bucky Beaver? You say you’re old too, and that name doesn’t ring a bell? Think toothpaste and “brusha, brusha, brusha…”

I bring up these ancient advertising characters who populated television screens in prior decades. Some are still hanging in there.  I addressed this issue years ago in a newspaper column. The motivation, as I explained then, was due to a conversation I had with someone when I brought up the Doublemint Twins, Speedy Alka-Seltzer and, I believe, the Pillsbury Doughboy. I often wonder what happened to some of them and whether the times and technology have improved the allure of contemporary ad characters as we stumble through 2022. The truth is we’re doing all we can to avoid these ads by turning to streaming video services and calling upon Tivo to skip the commercials. Nevertheless, I proceed with this as an opportunity to escape writing about more serious and scary things like the threat of nuclear war and emus who sell insurance.

The Doughboy has been around for a long time, rendering his giggle when poked in the tummy and reminding us that “nothin’ says lovin’ like somethin’ from the oven.” Sadly, he is not around anymore, with funeral services held for the departed Doughboy, who was reportedly laid to rest in “a lightly greased coffin” at the age of 71. According to his obituary, “Doughboy is survived by his wife, Play Dough; two children, John Dough and Jane Dough; plus they had one in the oven.  He is also survived by his elderly father, Pop Tart.”

I can claim no credit for the preceding punnery, which I discovered in an internet search from a source at Columbia University. The obit failed to mention that his stage name was Poppin’ Fresh and his first television appearance was in 1965. He reportedly lost a lot of weight not long before his demise, because Pillsbury apparently didn’t want its products identified with chubby characters anymore. Rumor has it that he could be crusty at times and seldom failed to remind admirers that he made a lot of bread and was rolling in dough. Believe it or not, the parent company that fired the Doughboy and broke his crumbling heart was Smuckers, and, as we all know, “with a name like Smuckers it has to be good.”

Okay, here’s a little quiz. Who is the oldest—Elsie the Cow, the trio of Snap, Crackle & Pop or Buster Brown and his dog, Tigue? All of these characters except Buster Bown, by the way, remain mascots of their product brands, which were, respectively, Borden’s, Kellogg’s Rice Krispies and Buster Brown shoes (now Caleres). Give up? Buster and his pooch were the oldest, having been introduced to the American public in 1904. Snap, Crackle & Pop (1928), by the way, are older than Elsie (1938).

These characters have been around for many generations, so their impact is inter-generational—one of the few things we can all identify with these days. That begs the question: Which commercial character who is still around is the oldest of them all?

Well, you might think it is Aunt Jemima, who was born as an advertising character in 1893 to promote the pancake mix and syrup bearing her name. Actually, the most senior one I could find is the smiling black chef depicted on the box of Cream of Wheat. The character actually has a name, Rastus, which, like Aunt Jemima at times, has been regarded as derogatory to people of color. However, the image of Rastus on the box is from the photo of a real person (not named Rastus, by the way) who was reportedly paid five dollars for his photo sometime prior to 1890 when his likeness first appeared on the box. Alas, his image was removed from the package last year.

Aunt Jemima is fictional and not based on a real person. I guessed Uncle Ben might be in the same league, age-wise, with the two previously mentioned, and he just happens to be an African American. Turns out he didn’t appear on the advertisements for his converted rice until 1946. There may have been racist connotations to all these characters in their time, but they were also trusted figures who were regarded with affection. Uncle Ben and Aunt Jemima recently underwent image and name changes.

The Doublemint Twins reportedly fell on hard times after their gum-chewing heyday—“Double your pleasure; double your fun…” They took that slogan with them to their next gig at a bordello, where, at the combined age of 134 (each 67 years old), they passed away within an hour of each other from complications of chronic tooth decay. You’re right. I made that up. In truth, the Doublemint Twins were resurrected by Wrigley’s after a 30-year absence for another round of TV ads in 2005. Different set of twins, of course. Coors Light beer had its own set of twins, but they simply weren’t as memorable as the Doublemint duo.

As for Speedy Alka-Selzer, he achieved virtual rock star status in the 1950’s and 60’s with his “Plop, plop, fizz, fizz…” Word is that Speedy didn’t invest wisely and died in a weird drowning accident. They say not one bubble was found in the pool when he was pulled out.

I don’t know why I have an urge to create a biography for these characters.  Take Charlie the Tuna, the StarKist spokesfish. The company said, “Sorry, Charlie,” to him in the 1980’s but brought him back again about 10 years ago. You figure one of these days Charlie will get caught and eaten, but, until then, we’ll keep an eye out for his obituary.

We all have our favorite characters, whether it is Tony the Tiger, Mister Clean or Smokey the Bear (technically Smokey Bear), but there are some who raise troubling questions. It was strange enough that Charlie the Tuna apparently had a suicide wish, but what about that dude who used to float around in the toilet bowl—the Ty-D-Bowl Man? I recall him dressed in a white suit. Seems he would be better off in brown. The actor who played the alabaster-clad professional patron of the porcelain, Dan Resin, died in 2010. His biggest role outside the toilet bowl was as the character, Beeper, in “Caddyshack.”

Qantas Airlines had a koala bear that hated them, and that was years before everybody else took to hating airlines. Then there was Madge the manicurist who dipped her customers’ hands in dish detergent. Meanwhile, Morris the Cat is still finicky with multiple Morrises continuing to hawk 9Lives, but the original Morris died in 1978 at the age of 17 after being discovered in an animal shelter in 1968.

Let us not forget McGruff the Crime Dog, Ronald McDonald and the lonely Maytag Repairman, a character who has outlived two of its portrayers, Jesse White and Gordon Jump, with a total of four actors playing the part since the first TV spot in 1967.

One of the more controversial characters was Spuds MacKenzie, a bull terrier and spokespooch for Bud Light in the late eighties who attracted young bikini-clad women. Perhaps they were imbibing too much Bud and didn’t realize how ugly that dog was, but the message seemed to be that even a dog can get chicks if he picks the right brew. Unfortunately, word got out that Spuds was a she, not a he, which makes you wonder what all those semi-naked young women were after. The dog who played Spuds, real name Honey Tree Evil Eye, has since died of kidney failure.