Speaking of Daffy, Porky and Scooby-Doo

Speaking of Daffy, Porky and Scooby-Doo 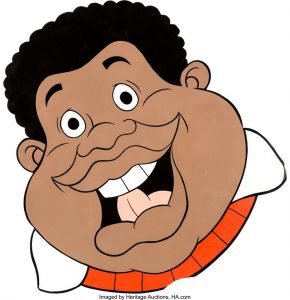 Fat Albert: No body shaming, but what can you say? “Hey, hey, hey!”

Banning a bunch of Dr. Seuss books due to derogatory Asian and African-American depictions has people all upset, especially certain U.S. Senators who are otherwise quite tolerant of attempted government overthrow and reticent in affirming that Black Lives Matter. But I can relate to some of those concerns when it comes to this cancel-culture backlash. It’s a complex subject to tackle, taking aim at past bad behavior that wasn’t considered bad, even an issue, in their time.

This is serious stuff, so I’m going to cut to the chaff and address a critical target of this emergent movement — cartoons.

I must confess that, through childhood and beyond, I have laughed at lispers, stutterers and other impaired utterers who have been among our favorite cartoon characters. Would Sylvester have been as funny without that iconic lisp and “thuffering thuccotath,” a.k.a. “suffering succotash”? What about that other prominent lisper, Daffy Duck, whose catchphrase was, “Youuu’re deththpicable!” Of course, there was the requisite spray of spit, real or imagined, from both. Hey, it seemed hilarious at the time.

Then we have Porky Pig who, aside from being a target of body shamers and an inability to escape being linked forever to obesity in his name alone, had that stutter— “Th-th-th-that’s all folks!” — that made us smile, not realizing they were making fun of something hurtful to people with speech impairments. We never stopped to consider how Porky felt, had he been a living being, that is, labeled with a redundant name. If someone is a pig, after all, do we really need to reinforce and ridicule his obesity by calling him Porky? Pigs are supposed to be porky and are literally comprised of pork and intentionally fattened so we can eat their flesh. Not so funny when we think of a supposedly harmless nickname, is it? By the way, according to an admission from Porky himself in a 1936 cartoon short called “Plane Dippy,” we discover that his full name was Porky Cornelius Washington Otis Lincoln Abner Aloysius Casper Jefferson Philbert Horatius Narcissus Pig. Assuming all cartoon pigs have Pig (or The Pig) for a last name, it seems a little much to preface it with Porky. That’s all I’m sayin’.

But back to speech-impaired cartoon characters. Is Tweety Pie cute, even adorable, when he says he “taw a puddy tat” of should we be offended? Then there is poor Elmer Fudd, who, aside from being continually outsmarted by Bugs Bunny and suffering a multitude of hunting injuries, can’t get any respect when he opens his mouth and complains about that “cwazy wabbit” and “wascally wabbit” or, at the end of a long day of unsuccessful wabbit hunting, “west and wewaxation at wast!”

All of the above characters were voiced by Mel Blanc, known as “the man of a thousand voices,” who died in 1989 as an admired entertainer and an exemplar of American humor. Should we go back and indict and defame him for exploiting speech impediments for cheap laughs and, worse yet, influencing children to make fun of playmates with similar impediments? This would be an example of cancel culture, which means that human behavior, words or actions that were acceptable, even applauded, 20, 30 or more years ago should be ostracized or blacklisted because they are taboo today.

Then you have Scooby-Doo, the mystery solving dog, who, along with his cohort, Shaggy, regularly found themselves encountering the monster of the week with Scooby exclaiming, “Ruh-roh, Raggy!” Scooby has had his share of cancellations and comebacks over the decades, but the expression, “Ruh-ro,” lives on.

Even disabilities were funny in their time. I’m thinking of the visually impaired (nearly blind) Mr. Magoo, who would regularly fall into manholes and walk into walls. What a riot! In the interest of fairness, his disability was treated as a quirky part of his character and it was the voice of Jim Backus that really sold Magoo’s popularity. He was so popular that he was once featured in General Electric commercials and print ads, as well as “the nearsighted Mr. Magoo” hawking Stag Beer.

If Porky Pig was an example of body shaming for cancel culturalists, image how they feel about Fat Albert, the Bill Cosby character who was not necessarily ridiculed in cartoons.  If anything, he was something of a leader and positive influence among his neighborhood group of mostly black friends who happened to be fat. Nevertheless, you can’t escape that perception when “fat” is part of your name. It didn’t help that Fat Albert’s legacy is tied to the once exalted and permanently shamed Cosby. What’s left to say? “Hey, hey, hey!”

Donald Duck gets a pass because his quacking banter is not a speech defect. He walks and talks like a duck, if ducks could talk, of course. It does bother me that Donald chooses to walk around without pants. I’m not offended, mind you, but who wears a jacket, a hat but no pants? Goofy wears pants, a shirt and a hat, but he doesn’t bark like a dog. He even has a dog of his own, Pluto, who he sometimes walks on a leash. It’s a dog walking a dog, for Pete’s sake. And just in case you miss that he is lovably stupid, his name is Goofy.

Am I being too analytical here?

We know that Pepe Le Pew, who wears no clothes, by the way, was recently condemned for past inappropriate sexual behavior and even for condoning rape through random touching, caressing and cooing with a French accent. It’s the accent that really does him in. How many naïve little tykes have been transformed into rapists by overindulging in Pepe Le Pew’s antics? Described as “a lecherously predatory skunk” in one recent news report, Pepe has apparently doomed the hopes of aspiring young skunks seeking cartoon fame.

We don’t want our kids exposed to the cat-and-mouse exploits of Tom and Jerry, because Tom’s is intent on making a meal out of Jerry, a noble feline pursuit if there ever was one. Animal rights advocates apparently don’t include mice among those mammals whose rights they protect, but, if they did, they can take heart that Tom has never got to turn Jerry into an entrée after all these years of trying.

Finally, there is the violence exploited as humorous in cartoons. Wile E. Coyote, constantly in pursuit of the Road Runner, wasn’t all that wily. His unwitting dependence on the Acme Company repeatedly resulted in him being shattered by explosives, flattened by hurtling anvils and turned into Swiss cheese by assorted projectiles. It doesn’t matter that Wile E. never succeeded in capturing or killing his prey for who knows what purposes. The good news is that, despite his appalling injuries, Wile E. always came back to try, try again, with perhaps a bandage or two, a black eye and a few lumps to show for his ineptness. As with Tom and Jerry, the predator-in-pursuit-of-prey story line has come to be known as cartoon slapstick violence.

Lisping ducks and stuttering pigs, pants or no pants, are proof that humor can be both uplifting and cruel, depending how you perceive them. Humor is, above all, a chance to laugh, smile and ease the pain and foreboding in our lives. Let’s hope we don’t reach the point where there is nothing left to make fun of, including ourselves.