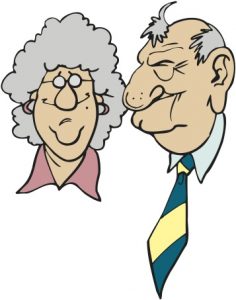 “I don’t know about you, but the only rocking I’ll be doing is in a chair!”

When it comes to my favorite music, I live in the past with classic rock. Classic rock is struggling to remain relevant. In fact, CNN recently proclaimed that this summer “marks the twilight of classic rock.” Bob Dylan is 81. Paul McCartney is 80. Carlos Santana, one of the youngest rock icons at 74, was rendered unconscious by heat stroke at a July concert and took most of the rest of his band’s scheduled tour to recover. Brian Wilson, the Beach Boys founder and genius songwriter, is also 80 and about six decades beyond anything resembling boyhood. Among the classic rock legends who are no longer with us are Tom Petty, Glen Frye, Roy Orbison and George Harrison. These guys basically died of diseases associated with old age and not from drug overdoses as was the case with the likes of Jim Morrison, Jimi Hendrix and Janis Joplin before their music became classic.

Their music lives on, of course, and is still being played at wedding receptions, at music festivals by cover bands and on tour by a number of the aging rockers previously mentioned. Many of their songs, especially lyrics, take on new meaning for people of a certain age like me. That certain age, of course, is old.

So what has changed about those lyrics, which can be moving, disapproving, protesting, life-affirming, silly, insightful, pretentious and nonsensical? The music told us to ring a gong as you get it on and, by the way, if you’re thumbing a ride west to San Francisco, be sure to wear flowers in your hair, This was the music of my generation. And most of us had an abundance of hair then. Some of it went down in flames, totally devoid of relevancy, and some continues to live on and covered by younger musicians. The Beatles’ ”Yesterday” has been covered an amazing 2,200 times. And, yes, “(I Can’t Get No) Satisfaction has been covered by more recent musicians like Vanilla Ice and Britney Spears.

So I’m thinking the other day about how the meaning of lyrics has changed from the days I first heard and celebrated them to what it means today to me and those of my generational ilk. That’s right, I wrote “ilk.” Pete Townshend of The Who never used “ilk” in his songs, but he did write the line, “I hope I die before I get old.” He admits that, at age 77 and still touring, he is regularly reminded of that.

I don’t want to stray too far off topic, because I might forget what I was writing about and go back to the crossword I was working on. Crosswords strengthen your memory, you know.

Now where was I?

“Satisfaction,” as in “I Can’t Get No,” was one of the biggest hits of my youth—in my prime at about 18, in fact. What it really meant to somebody in his or her late teens or early twenties was, “I can’t get enough.” Nowadays, for many of us Baby Boomers, it means “I can’t get any.” Make that “much.” That was by the Stones, as in Rolling, and not Gall or Kidney, which are much too common among my age group. Mick Jagger and Keith Richards are both 78 and are still touring with the band.

How about “Sugar, Sugar,” a bubble gum hit by the Archies? It was all about sweet romance. Now we hear it and think we better get on a low-carb, high-fiber diet or we’ll be shooting insulin every morning. A generation later, we had Def Leppard’s “Pour Some Sugar on Me,” a less subtle version of sweetness. You know, “I’m hot, sticky sweet; from my head to my feet…” Thirty years ago, hovering on middle age, that could still be a turn-on. Today, it gets me thinking that I really need a hot bath.

Jerry Lee Lewis was big before I reached adolescence, but “Whole Lotta Shakin’ Goin’ On,” though regarded as an oldie and not classic rock, was still popular at the dances in the school gym when I was a teen. Talk about a song title whose meaning changes from age sixteen to sixty-five! In your teens, you generally had control of body parts you wanted to shake— even your booty. Not so true in your sixties, seventies and eighties, and that sagging booty might be due for a hip replacement. You could also shake “your groove thing,” but I think I can leave in there.

When I first heard Jim Morrison sing, ‘C’mon, baby, light my fire,” I knew what he was saying. Nudge, nudge, wink, wink. Now when I hear it, I’m thinking it is getting a bit chilly and I should tell my wife to turn up the thermostat the next time she walks by. I’d do it but I’d have to get out of my chair.

I loved, “You Really Got Me” by the Kinks and later covered by Van Halen. It was so primitive and right to the point. Nowadays, when I hear “you really got me goin’” and “got me so I can’t sleep at night,” I’m thinking about trips to the bathroom at 2 a.m.

Some think Bob Dylan’s “Like a Rolling Stone” was the greatest rock song of all time. I know Rolling Stone magazine does, but they may have been a bit prejudiced. Dylan asks: “How does it feel? To be without a home, a complete unknown?” That was cool back then. Now I’m thinking it won’t be long before I’m being wheeled around the hallways of some sanitized nursing facility with nurses who insist on calling me Hon and Sweetie.

Why Is Sting Staring at Me?

And, you know, some 30 years ago when Sting sang “every breath you take… I’ll be watching you,” he could very well be describing my final days under nursing care.

When Ben E. King sang “Stand By Me,” he was referring to everlasting love and not somebody steadying you in your walker. Ditto with Bill Withers and his plea to “Lean on Me.” “Everlasting Love,” a 1967 hit, seemed like such a long time back then. Now it’s more like, “How are we ever lasting through (pick a number of years)?”

Hey, this is getting to be a drag talking about final days and nursing homes. We can still “shake it up, baby” when we “twist and shout” as the Isley Brothers first beckoned us, what, some 55 years ago? Except now when we twist our toneless torsos and rickety backs, it is likely to result in a shout— of excruciating pain, that is. As for the “work it on out” part, I‘m thinking chiropractors and not innovative dance moves. Hey, and let’s not forget one of my favorite rock songs— “You Shook Me All Night Long.” On the dance floor, AC/DC lived up to their promise and, yes, the walls did start shakin’ and the earth was quakin’. Now, when that happens, I gotta find a chair before I lose my balance.

If there is one song title that is more meaningful now than it was when I first heard it, I’d have to say it is “All You Need Is Love.” I was more cynical when the Beatles first performed that song, fresh from the Strawberry Fields in their hippy stage. Life was more complicated after Vietnam and we were reeling from the crushing realization America wasn’t always on the moral high ground as we were taught in our public school classrooms. Even love seemed tainted.

Turns out that all I did need was love, and I was blessed to have the right person to love me and for me to love back. Did I do anything to deserve such good fortune? As Led Zeppelin confided on that Stairway to Heaven, “It makes me wonder.”

(Note: This is an updated version of a newspaper column I wrote about eight years ago.)