Nothing You Needed to Know about Minds and Brains

Nothing You Needed to Know about Minds and Brains 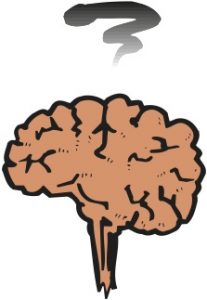 Don’t mind me if I pick my brain.

The potential of the human mind is limitless. That’s a no-brainer. Well, without a brain, you couldn’t have a… Never mind. Anyway, I’m not talking about people who don’t have brains. Their potential for having a mind is severely limited.

It has been demonstrated after years of pseudo-psychometric research and exhaustive testing of people (who don’t seem to mind) that if you still don’t have a mind once you turn 19, you’ll probably have to rely on something else to get by. It’s not all that tragic really. Donald Trump did it. It’s like blind people who have to rely on their other senses to take the place of sight. Their senses of touch, feel, humor and smell become so keen they can live normal, boring lives like the rest of us. To make up for not having a mind, Trump must have turned to keener senses which escape me at the moment. Maybe like the extrasensory ability to immediately recognize any criticism as fake news.

My own mind is more of a middle-of-the road mind, which makes it middling if I might say so myself. Then, again, I might not. It’s not an elite mind concerned with intellectual pursuits like generic reconditioning and the cosmic perambulation of slugs. But it is on a higher plane than those who can endure watching more than ten minutes of “Wheel of Fortune” without changing the channel. “Wheel of Fortune,” by the way, is dangerous because it makes mindless people believe they have minds, because they figured out that the answer to “t_ger by the ta_l”  was “tiger by the tail” after buying the vowel “i.” If that made no sense to you, you’re among the fortunate few who haven’t watched more than ten minutes of “Wheel of Fortune.”

Mind carries a multitude of connotations beside the one Milton defined as “its own place.” This is the control room mind that makes everything thing else function and is on intimate terms with the soul. The fact that I don’t understand the previous sentence doesn’t matter, because we all know the significance of mind over matter.

As we all know, mindlessness is not an enviable state. The most enviable state, I think, is Colorado, but that is out of my sight, therefore making it out of mind, so that shouldn’t be of concern right now. Getting back to Milton, he had a great mind, which allowed him to write great books. That’s why we only need to call him by his last name. People with no minds who have managed to become famous in spite of that handicap are often known by just their first names. Usher, Jewel, Madonna, Sinbad and Flo are just a few examples. Proof of how mindless they are is that they named themselves the same way we do our dogs. Even Snoop Dogg knew better than that —even if he didn’t know how to spell dog. Famous entertainers whose work will still mean something in the year 2050 are known by their last names. Dylan was never known as “Bob.” Bobs are a dime a dozen. Ditto with Bogart. Humphrey, really? In my middling mind, I find it interesting that the Beatles, still remembered with half of them gone, started out as John, Paul, George and Ringo. The most renowned of the quartet came to be known as MaCartney and Lennon. Ringo is still known as Ringo, if known at all, and the quietest one, George, will always be known as George Harrison.

But I’m digressing from my central topic here, which is mind. You can do a lot of things to or with a mind. You can blow it, though not the same way you do a nose. You can speak it, and you can bear something in it. You can even read it if you have psychic abilities or have been married long enough. You can call AND bring something to mind, and you can have a mind AND half of a mind to do or say something. I once heard somebody say: “I have half a mind to give that guy a piece of my mind.” (I might have made that up for purposes of this blog.)

As hard as it may be to believe, I’m no expert on minds. Yet it seems to me that if you keep giving people pieces of your mind, you’ll be fortunate to have even half a mind left— probably the part that controls drooling.

Half of a mind should not be confused with two minds (as in “I’m of two minds about this”), but it may have something to do with being in your right mind. You can speak your mind or see something in your mind’s eye. This is getting complicated, because now we have given our minds eyes and mouths if not other bodily parts.

Comparing Our Minds and Brains

Minds are fun. You can play mind games with them. They’re very pliable. You can bend them, and they can apparently be boggled. However, you can’t tease them. Brains can be teased, but not minds. You can be brain dead, not mind dead, which implies the latter, like the soul, is somehow immortal. You can be a lame brain even though it doesn’t have legs. When you think of a brain, you think of a convoluted grey and spongy thing that can be cut out, carried off in a baggy and stored in jars in laboratories where they are used to nauseate unsuspecting college freshmen.

Other differences between minds and brains are weather-related. Brains have storms. Minds have more stable climates and can be controlled. Minds are more adaptive than brains. Open minds are good. Open brains are susceptible to infection. Minds are more sociable. You can have meetings of them where the meeting of brains can get messy. “All right, who put the cerebellum in the jar with the temporal lobe?”

Minds may be able to meet but not mate, but the existence of a “brainchild” suggests intercourse beyond the mental kind. How they can do this without meeting is one of life’s great mysteries. You can have a buttoned-down mind despite its potential for being limitless.

Hygiene is more important to brains than minds. Brains can be washed. Inexplicably, minds are the more vain of the two. People are always trying to make up their minds. My feeling is that after applying so much make-up, you need to wash it now and again. Looks like I’m starting to take this to far, but at least I’m mindful of doing so, and if I keep this up, there is a probability of brain damage. Not to me. It’s too late for that, but to anyone who read this far.

I could go on and on about the human mind, but I already have.