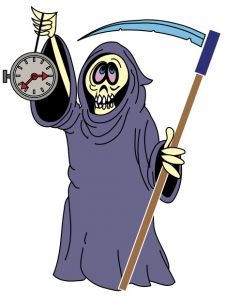 Something for those scared to death of dying?

It seems that people are becoming increasingly aware of the value of history and the lessons we should be learning from it. Museums and historical societies are all around, supposedly to sustain our understanding of the past, as well as its impact on our present while providing guidance for the future.

Driving across the wide expanse of Virginia over the weekend I saw a big billboard proclaiming Cooter’s Place, one of three official Dukes of Hazzard Museums. This one was in Luray, VA, with sister museums honoring Bo and Luke Duke and the denim-derrièred Daisy at Cooter’s in the Smokies establishments in Nashville and Pigeon Forge, Tennessee. Of course, Hazzard County is fictional and located in Georgia, which isn’t, so fake history is apparently as American as fake news.

Just before we crossed North Carolina line into Virginia we passed up the opportunity to visit the Andy Griffith Museum in Mount Airy, NC, Griffith’s hometown and the inspiration for Mayberry and its fictional citizens like Sheriff Andy Taylor, Aunt Bea, Opie, Barney, Goober, Gomer and, my favorite, Floyd the barber. The museum is mostly about Andy Griffith, who is real, and all those Mayberry denizens, who aren’t.

Mary and I like to check out local museums in our travels, but we prefer real history. In St. Pete, from whence we recently returned after a three-week stay, we have visited the Holocaust Museum there, the Salvador Dali Museum and others in the general vicinity. The lessons in the two museums I mentioned range from the serious to the surreal, but there are so many more, and they often salute the silly, salacious and sublime.

The official government tally of 35,000 U.S. museums doesn’t count some of the make-shift tourist traps that claim to be museums or those that exist only in cyberspace.

As is often the case with any attraction intent on drawing people and making money, museums may showcase innovative, comical and, yes, stupid subjects. I think I would enjoy a visit to the Museum of Failure, but I don’t get to Sweden that often. Most of the commemorated failures there originated in the United States and involve various products and ideas that bombed, including that green ketchup Heinz tried to market and the Segway, which was supposed to transform 21st Century transportation, mostly in the cities and suburbs. As the museum’s curator Samuel West describes the fate of the Segway: “And we all know that the Segway today is used by tourists before they go get drunk.”

—Museums for Every Interest—

Among the featured items at the Museum of Failure is a loser board game entitled, “I’m Back and You’re Fired: Trump the Game.” It’s a simulation of his stint on the reality show, The Apprentice, not in the White House— four years of history I would prefer not to be repeated. Enough said.

Some museums get far too serious, as is the case with the Museum of Death in Los Angeles. It has been described as creepy and macabre, but its alleged purpose is to “take away the stigma of people being afraid of dying.” Apparently, intimate exposure to body bags, coffins, morgues, skulls and death masks hasn’t proven to be an antidote for those who are scared to death of death, perhaps qualifying it for the Museum of Failure.

Before mentioning a museum that recently met its demise in Washington, D.C., I remind you that I am not making this stuff up. Gone but, unfortunately, not forgotten is (or was) the Museum of Menstruation. It was driven out of existence by public abhorrence toward the theme and the exhibits, which included tributes to Tampons and various, let’s say, absorbents of blood, old newspaper ads for so-called feminine hygiene products, as well as mannequins garbed in menstrual undergarments popular through the years. Perhaps it would have been more readily accepted had it only been open once a month.

And if you think that crosses the line, you’ll want to steer clear of the Icelandic Phallological Museum. And, yes, if you are thinking phallic, you know what is being exhibited in this Reykjavik exhibition hall. Yes, size does matter, and you’ll get to see the pride of virtually every male mammal—an estimated 93 specimens— all submerged in jars of formaldehyde, including whales, bulls, giraffes, dogs and cats.

That brings me to the International Banana Museum in Mecca, California, which houses more that 20,000 items related to bananas, dubbed the world’s most phallic fruit, in one room. It doesn’t end there, so to speak, as can be seen in the Sulabh International Museum of Toilets in India. Remember that the invention of the flush toilet, as we know it today, was credited to a guy named Crapper. Actually, Thomas Crapper invented a certain type of flush toilet, which we won’t get into here, but the credit for the original, more primitive, toilet 300 years earlier goes to Sir John Harrington, another Englishman.

And so the list of museums and asininity of their themes grows: Spam, baked beans, asphalt, barbed wire, gourds and mustard. There is even a museum devoted to that symbol of worthlessness, the wooden nickel.