Mosquitoes and Bats and  Swine , Oh My!

Mosquitoes and Bats and  Swine , Oh My! 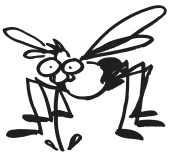 How does a weakling become a bully— one of such immensity that the whole world cowers before its invisible fury? This bully, known familiarly as COVID-19, has a posse of some familiar characters in the animal kingdom who have helped set it free while imprisoning the human race.

The corona of the coronavirus is a cushion of protein, reportedly fragile and easy to vanquish with sudsy soap, alcohol, bleach and other commonplace cleansers and disinfectants. It is too weak and puny to enter through healthy skin and has to take the easy entrance through vulnerable orifices like the nose, mouth or eyes to infiltrate the human respiratory system.

And who deserves the blame for this whole try-to-take-out-the-human-race thing? Why, bats, of course.

And what’s with the bats? Are they pissed because God cheated them on looks, keeping them in the dark and in substandard living conditions? The other animals, wherever their habitats, didn’t want them around: “Oh, no, bats! There goes the neighborhood.”

Did God pick a pair of them for the Ark? Not from what I’ve read in the Bible. If He did, maybe Noah what’s-his-name put the kibosh to that.

Okay, supposing a couple did manage to make the voyage? If so, you know they were relegated to the dark cargo hold with the elephant trunks, kangaroo pouches and whatever other luggage was popular in the animal kingdom back in the day. Somehow the bats must have managed to slip on board after sundown, with the deluge as an added distraction, and hang around in the dark and out of sight—a male and female, of course— to preserve this lowly regarded class of mammals.

How much revenge is too much?

So why make life miserable for humans? They are the only mammals who can fly. The rabies thing isn’t enough revenge for them? They are credited —make that discredited— with more than 60 viruses that infect humans. Their only warm-blooded competition in spreading zoononic viruses are rodents. That’s right, rats, as in Bubonic Plague rats. Bats and rats could very well be our undoing. Like Trump’s Tweets, we don’t want them around, but they won’t leave us alone.

A zoononic virus is transmitted to us from animals, and we all know by now that COVID-19 is one of them. We have been told that there are other coronaviruses out there among various animal species just itching to infect us. Itching we can handle. It’s the not-breathing part that is getting us down.

So the animals are conspiring against us. Now the Swine Flu pandemic made more sense, because we haven’t been very nice to swine lately. We pack them in cramped quarters where they barely had time to root and enjoy a relaxing mud bath, let alone practice social distancing, which, in fairness, wasn’t a known preventative at the time. Is a steroid-laden pork chop worth such humiliation?.

Dromedary camels were confirmed as the origin of another coronavirus pandemic called MERS, a.k.a. the Middle East Respiratory Syndrome.  It seems some Arab sheiks availed themselves of these noble Ships of the Desert because they could go for days at a time without a slurp of water? They tramped through the searing sand, from oasis to oasis, seemingly compliant and unconcerned, with a human or two or three clinging to that solitary hump. They are known to urinate infrequently and were not encouraged to do so.

When they do take a whiz, it is said to come out as thick as syrup. It’s a wonder they can relieve themselves as all. It does give new meaning to the expression “pissed off.” (Sorry about the piss references. I think there’s one more.)

Again, we’re talking about the incubators of these viruses that unleash sickness and death. They may start the contagion, but they leave it up to us to spread it around. We home sapiens are obviously very good at spreading stuff because we’re a sociable bunch.

Like everything else nowadays, we somehow turn documented science into a political issue. By the time we get done arguing about whether we’re doing enough or too much, we’re in the midst of a crisis. When Manhattan is underwater, there will still be stalwart troglodytes pooh-poohing climate change as a hoax.

This virus does not even qualify as a living organism, which is redundant because an organism is, by definition, a living thing (“a given thing and a terrible thing to lose,” according to the song).

It turns out bats aren’t all bad…

Bats and rats aren’t exactly making the rest of us mammals proud, but when it comes to spreading disease, a well-known pest leads all the rest. We all know that mosquitoes are nothing to mess with. Witness malaria, Yellow Fever and West Nile Virus, which are so-called arboviral diseases. You can contract encephalitis, a serious inflammation of the brain, from an infected mosquito’s bite. Have we found anything productive about mosquitoes, other than giving you an excuse to get away from a boring picnic and Uncle Bob’s charred burgers? Otherwise, thanks to mosquitoes and ticks, we have to brave the best and warmest weather of the year in long sleeves and long pants, sheathed in a coat of bug spray, whenever we venture outdoors.  Remember outdoors?

Come to think of it, bats eat mosquitoes. Chalk up one for the bats.

You might retain a vague memory of the bird flu, a.k.a. avian influenza, another zoononic virus, but its link to humans was through tainted poultry. You might say that, for a time, we were playing chicken with our health. You might say it, that is, if you can’t think of anything really funny about chickens.

Herpes B can be fatal and has been linked to monkeys, and I’m trying very hard not to write what I’m thinking about that.

By the way, speaking of things you should avoid with animals, it is strongly advised that you do not handle or play with animal carcasses. Why? Harmful bacteria that would normally be contained within the animal’s body, including dearly deceased Rover and Puddy Tat, may escape during decomposition. That’s why you don’t leave your dead pets lying in the living room all week until you get around to burying them.

There are all kinds of disease spread through animals by bacteria, virus, parasites and fungus, but it usually requires some kind of direct contact, eating it or consuming something from it like milk, blood or urine.

Don’t count on much of the latter liquid from a camel unless you prefer your urine thick. End of piss references.