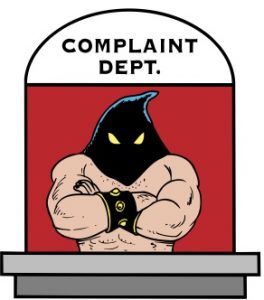 Why all the complaints about wearing masks? It’s creating a new industry.

Masks, for some, have become a symbol of individualism and a reason to resist and proclaim their Constitution rights. What about the rights of people who don’t want to be exposed to bare-faced people? It’s not about your right to wear one. It’s about our right to get through this with as few casualties as possible.

Masks, in comic book America, denote bravery and heroism. Consider the Lone Ranger, Zorro, the Green Hornet and other characters you’ve never heard of if you’re younger than 40. Masks can be dangerous, for instance, if you walk into a bank wearing one back in the day when you could actually walk into a bank. Or if you’re a black guy jogging in a white neighborhood in, let’s say, Georgia.

Most masked heroes just cover their eyes, not nose and mouth. Batman wore a mask but Superman didn’t. Even as a kid I wondered why Lois and Jimmy couldn’t figure out who Clark Kent really was. It was Kent who had to wear the disguise— a pair of spectacles that pretty much looked like Superman wearing glasses. If we were wearing masks over our eyes, the following response from Vice President Mike Pence might have made sense when he was asked why he wasn’t wearing a mask at a recent gathering: “When I talk to people,” he infamously replied, “I like to look them in the eye.” President Trump opted not to wear a mask when he toured a factory making masks. You can’t make this stuff up.

It was only a matter of weeks ago, though it seems so much longer, we were still shopping in grocery stores, perhaps encountering a random wuss was wearing a mask. Then, after most everybody agreed it was the right thing to do to curb spreading the potentially fatal disease and controlling the virus crisis, some people got tired of wearing masks.  They started claiming it had something to do with the Constitution, manhood, Communism and other silly stuff. Some started strutting around sans masks as if they were leading a revolution.

One of them was (and is) the President of the United States who has the luxury of being tested several times a day while these tests were (and are) still unavailable to most Americans. This is the same president who went along with science for a while, which was something of a miracle in itself, by standing beside his own experts, nodding in agreement as we were all cautioned to wear masks. He never did, of course, even when standing in close proximity to elderly veterans who are a part of our most vulnerable population, one of them 95 years old.

Not Better to Give Than Receive

You see, as much he says he has become an expert on “this virus stuff,” he seems to think it is about him being manly and tough instead of the real reason for wearing them. That reason, of course, is so we don’t spread it to someone else. That means refusing to wear a mask when among other people is selfish and suggests a huge sense of entitlement.

It is better to give than to receive does not apply to communicable diseases. The tests, as we have learned from recent attested testing of the tests by the Food & Drug Administration (FDA), are far from error-free. The point is that even the oft-tested person could still spread the virus. And, anyway, what’s the big deal about wearing a mask? I know some people have congratulated me on my suddenly youthful and wrinkle-free facial features. Masks can make a fashion statement. One of my masks is camo so my face can sneak up on people and game animals— no closer than six feet, naturally.

I think those Keep America Great hats, churned out in mass quantities, could be made into masks and cover thousands, even millions, of faces, rather than the bald spots and bad haircuts hidden by the hats.

As is the case with most things nowadays, even mask usage has political ramifications. Some are rebelling and calling the whole pandemic a national hysteria. Hey, they want to get back to work and drinking beer at their favorite pub. I get it,. We all understand that part.

Even Cyril Wecht, the famed forensic pathologist, has complained about governmental overreaction to coronavirus, much to the delight of those who are trying to dispute the science and disparage all work and sacrifice being done to slow the spread. Of course, one must consider that Dr. Wecht is pushing 90 and his patients are all dead. He hasn’t saved one of them yet.

Then there are the 90,500 dead in the U.S. and still climbing from the virus, with an average 1,000 deaths and 24,000 confirmed cases a day over the past three months. The first thousand-deaths-a-day date was March 26th. As recently as May 16th, the President was still saying it could go away without a vaccine or continued mitigation. Let’s hope he’s right. This actually happened with the devastating Spanish Flu over 100 years ago so that optimism does have precedence, if not plausibility, based on what the science is telling us.

But I digress. Masks have become a symbol of the political chasm widened by the virus crisis.

Experts and scientific expertise are being increasingly shunned as many chafe at the bit over losing their freedom which, translated, means their lifestyle. Personally, I think any pursuit with the word “style” in it does not warrant constitutional protection. Loss of jobs, income and contact with loved ones are another story.

Historically, President Trump compares favorably to another president— and a Democrat at that—making the former look relatively efficient and prescient. Woodrow Wilson was surprisingly mum, knowing what we know now, in his lack of leadership in containing the so-called Spanish Flu of 1918-19, now believed to have started in the United States and then carried across the Big Pond to the killing fields of Europe. More people died from the influenza than on the battlegrounds of that horrendous war. And yet, the Spanish Flu was barely mentioned as people gathered for bond rallies and in triumph at the end of the “war to end all wars.” Leadership from the White House and Capitol Hill was practically nonexistent. There was a war to be fought, men to train and weapons of war to manufacture.

As lethargic as the American response in 2020 has been to COVID-19, since first learning it was a potential pandemic in mid-January, Trump looks good next to Wilson on that front at least.

Wilson had committed our country to a world war. A century later the idea of declaring war on this biological invader appealed to Trump, who took to calling himself a “wartime president” facing “an invisible enemy.” However, it would mean weaponizing scientifically, rather than militarily, and the president has never been a fan of science. Our scientists and healthcare professionals have done an amazing job responding with a minimum of governmental guidance, most of it coming from governors and the private sector. We may not all be in this together, but most of us are.

In short, Trump may have been slow, but Wilson didn’t react at all. He couldn’t even blame it all on those lying Chinese.

Wilson, who was viewed as a hero after the war in England and France, seemed on his way to championing a League of Nations, an instrument for maintaining world peace. That was stymied when he eventually fell very ill himself, most likely from a second, more vicious cycle of the Spanish Flu. He was never seen wearing a mask, even though millions on American were actually belatedly doing so and trying to stay apart.

He never really recovered and was so dreadfully ill, with symptoms indicative of the Spanish Flu, that he couldn’t get out and stump for the League of Nations. He seemed to have survived that illness but was fairly ineffective in the last two years of his second term. Because he didn’t die until 1924, his immune system severely compromised, the official cause of death was deemed a major stroke. According to John Barry, author of “The Great Influenza,” his symptoms included “high fever, severe coughing and total prostration” over a span of months. He concluded they “perfectly fit influenza and have no association whatsoever with stroke.”

What does this have to do with President Trump— aside from both presidents’ apparent aversion to masks (in fairness to Wilson, he never called upon others to wear them while abstaining himself)? Wilson’s behavior while prostrate with the disease, indicative of a lapse into mental illness, strike a familiar chord in the presidential behavior we’re witnessing today.