Looking Back at the Lyrics of Our Lives

Looking Back at the Lyrics of Our Lives 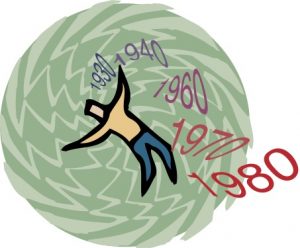 Every generation has the songs and lyrics that remind us of the events and feelings we may have forgotten otherwise.

There are song lyrics that get you right where you live. As a kid, I remember Chuck Berry singing a song that basically told the older generation, namely our parents, to back off. This is our music, as crude as you may think it is, and you can have your Big Band music and your symphonies.

“Roll over, Beethoven,” Chuck exalted, “and tell Tchaikovsky the news.”

That may have been the first song I can remember that grabbed me like that, but it wasn’t the last. It’s not that it was deep or particularly wise, but it captured a spirit, maybe a bit of rebellion, that was communal. It was our music, and when we became parents, our kids had their music. And then came our grandchildren. “Do you call that music?” you asked, echoing what our parents and grandparents said to us.

You have these little snippets, cool lyric lines like the one Gracie Slick belts out in “Somebody to Love” by Jefferson Airplane: “And your friends, baby, they treat you like a guest.” Is there a better way to make a point about the shallowness of some friendships?

I have always been fascinated by the stanza in “You Shook Me” by AC/DC: She had the sightless eyes,/Telling me no lies,/Knocking me out with those American thighs.

I was never sure what that meant (well, maybe the “American thighs”), as far as being able to explain it, but it certainly made sense instinctually.

Like I said, these are little gems in songs that may be, for the most part, mundane in terms of overall message. I think of the line in the Eagles’ song, “Already Gone,” that always gives me pause: So often times it happens that we live our lives in chains/And we never even know we have the key.

I know it’s a well-worn sentiment, that the answer we seek is within ourselves (or the Bible for some), but it’s still one of my favorite lyrics because it’s true.

On the other hand, the Eagles also gave us “Hotel California,” and there are some lyrics in there that don’t seem to make a whole lot of sense, though they are very visual. And speaking of biblical, it as fitting for the Book of Revelations: And in the master’s chambers,/they gathered for the feast./They stab it with their steely knives,/but they just can’t kill the beast.

From the allegorical to the sublime, there is nothing like Queen’s “Bohemian Rhapsody” for just having a flat-out good time with the lyrics: I see a little silhouetto of a man,/Scaramouche, Scaramouche, will you do the fandango?

Most of that song is made-up stuff. Made-up words are not all that unusual in rock lyrics. Bob Dylan toyed with them, and Steve Miller fooled a lot of people with his “pompitous of love” in “The Joker.” Hey, who needs a dictionary when you can come up with a word that sounds like it means what you want to say with the right number of syllables?

The Beatles could get pretty strange at times, most of the weirdness coming from John Lennon. Witness “I Am a Walrus.” But my favorite nonsensical Lennon lyrics come from “Come Together” and this line in particular: He say, ‘One and one and one is three’/Got to be good-lookin’ cuz he’s so hard to see.

There are a lot of great lines in Don McLean’s “American Pie” with the Chevy to the levee and all of that, but I liked the way he reversed the term “buckin’ bronc” in the song: I was a lonely teenage broncin’ buck/with a pink carnation and a pickup truck./But I knew I was out of luck/the day the music died.

Well, he had to come up with something that wasn’t an obscenity to rhyme with truck, and it works.

There are lots of bad lyrics in rock ‘n’ roll, but there are some clever ones, too. Eddie Cochran wrote “Summertime Blues” back in 1963, but one of my favorite lyric lines from early rock in came from that song: Well, I asked my congressman and he said, quote,/“I’d like to help you son, but you’re too young to vote.”

There are also a lot of clever Beatles lyrics, and when you have great tunes to go with them, so much the better. The lyrics from “When I’m 64” make fun of growing old, and it was a lot funnier when I wasn’t on the shady side of 64—an age both the surviving Beatles passed more than a decade ago: When I get older, losing my hair/Many years from now./Will you still be sending me a Valentine,/birthday, greetings, bottle of wine?

Classic rock got away with a lot of double-entendre and suggestive lyrics. The image of being knocked out by American thighs didn’t offend too many of us, male or female, but the same can’t be said for other classic rock lyrics and song titles.

Nobody had to guess what Kiss was suggesting in a 1977 release: “You pull the trigger of my love gun.”

And let’s not delve any deeper into the lyrics of ZZ Top’s “Tube Snake Boogie,” which I always thought was “Tube Steak Boogie.” Anyway, same visual.

Melanie, who peaked in 1970-71 with a handful of hits, warbled an oldies classic that some of the more naïve among us thought was an innocent song about childhood play. Turns out it was a different kind of play not recommended for children: I’ve got a brand new pair of roller skates/You got a brand new key/I think we should get together and try them out, you see.

The Who laid it out in a favored party sing-along of the seventies with the refrain “Mama’s got a squeeze box; Daddy never sleeps at night.”

It’s interesting the number of songs that suggest something sexually inappropriate — a term that wasn’t even used in the sixties, seventies or eighties. We know Neil Diamond was never considered controversial, but his love song, “Girl, You’ll Be a Woman Soon” could seem the musings of a dirty old man.

Meanwhile, Gary Puckett (and the Union Gap) is fighting the urge to cohabit with an underage temptress: Young girl/Get out of my mind/My love for you is way out of line/Better run, girl/You’re much too young, girl

At least Puckett was trying to do the right thing. Diamond, however, seemed to be beckoning with “come take my hand” and “soon you’ll need a man.” Take it easy, Neil. Find somebody closer to your age. How about that Sweet Caroline? Remember those good times that never seemed so good? Could that be the cancel culture police at his doorway?

Even the innocent 1950’s can’t escape lewdness, even though certain words didn’t quite mean the same then as they do now. Witness Little Richard and his “good golly Miss Molly you sure like to ball.” The word “ball” referred to partying then. Then you have the derivation of “making love,” which was a lot more innocent in the fifties and sixties and its popular and outmoded activities like “smooching” and “petting.” Beyond petting was “going too far.” Or so I’ve been told.

Rock has been very political at times, and it was music that fueled the anti-war protest back in the late sixties and early seventies. I was back from Vietnam, discharged from the Army and in college on the GI bill in May of 1970 when the tragedy occurred at Kent State. I too began questioning where we were heading as a nation when that happened, and Neil Young wrote the following as recorded with his friends, David Crosby, Stephen Stills and Graham Nash: Tin soldiers and Nixon coming,/We’re finally on our own./This summer I hear the drumming,/Four dead in Ohio.

I wouldn’t call that a beloved lyric, even a favorite of mine, but it ranks among the most memorable. Sometimes it takes a song to keep you from forgetting things that shouldn’t be happening in a Democracy.