Laughing at Our Scary Clown Prince

Laughing at Our Scary Clown Prince 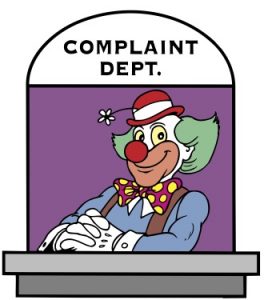 Donald Trump has become the Clown Prince of American Politics. I’m talking about the entire history of American politics. This is a jester who elicits few laughs and, like the modern breed of clowns, is more scary than humorous. He looms in some of our nightmares as something out of a Stephen King novel. For others, his brand of humor is a confirmation of pent-up animosity, fear, frustration and intolerance that allows them to cheer and pump their fists at his incessant name-calling and put-downs of critics and rivals.

As with most traditional clowns he relies heavily on makeup. He is the Orange Clown, and who really knows what lies beneath? That’s because the real person is a chameleon, taking the path that gives him the least resistance toward achieving his goal of becoming King of the World. He was a Democrat when that best suited him as he rose to celebrity status as the ultimate dealmaker and bankruptcy specialist. He has always been rich, and this billionaire has used bankruptcies to make him even richer— a tool to recoup his losses and erase tax debt. (Note: He has never declared personal bankruptcy, but has done so four to six times— only his tax returns will tell us for sure—for one of his many corporate holdings. It’s a business tactic that very rich businessmen use to their own advantage while the public ultimately pays the bill.)

The Clown Prince laughs it off— a little song, a little dance, a little seltzer down our pants— and heads to another rally to entertain the regular attendees of his circus-like revivals with his unique hate-rhetoric, where he says things I’m not even allowed to write in this family newspaper. How often do Presidents get bleeped in a public speech? Even Harry Truman, who was castigated by Christian conservatives for saying “damn” and “hell” to emphasize a point here and there, would undoubtedly cringe at hearing Trump last week in Minnesota saying that the previous Vice President “understood how to kiss Barack Obama’s ____ …” well, you probably heard it.

The trouble with our reigning Clown Prince is that if he is trying to be funny, he should be reminded that memorable humor requires wit— and not just half of it. You can’t even call it slapstick because his comedy is not visual, other than via the smugness and self-satisfaction reflected in his facial expressions.

There is nothing more disheartening than humor that falls short. Stand-up comics who experience this refer to it as “dying.” The silence is supposedly devastating when you are out there to get laughs. Our Clown Prince doesn’t have to worry about falling flat. His audience loves all of his quips— the nastier and more insulting the better. By the way, one definition of “quip” is “a witty or clever saying.” The primary definition, which best defines the Clown Prince’s humor, is “a sarcastic or cutting remark.”

I touched on this topic last June when I compared him to insult comics. The classic example was the late Don Rickles, a.k.a. “Mister Warmth,” who said the following about:

One thing Rickles said in all seriousness may best explain the difference between his insults and those of the president: “If I were to insult people and mean it, that wouldn’t be funny. There is a difference between an actual insult and just having fun.”

We know about the nicknames Trump seems proud to have created: “Crooked” Hillary Clinton, “Lyin’” Ted Cruz, “Liddle” Bob Corker, “Dopey” Mark Cuban, “Little Rocket Man” Kim Jong-un (before they became soul mates), “Slimeball” James Comey, “Mad Dog” James Mattis and his favorite nickname target (aside from Hillary), Joe Biden, whom he has called, among other monikers, “Sleepy,” “Sleepy Creepy,” “Crazy” and “Quid Pro Joe.” And that just scratches the surface of his innovative name-calling. Most are unimaginative at best, but Quid Pro Joe, I confess, is pretty catchy.

As was the case with Kim Jong-un, the Clown Prince sometimes does an about-face with his belittling nicknames when he reassesses them as a political ally or develops a friendship with them.

A case in point is one particular politico who the Clown Prince dubbed with some of the following labels: “publicity seeking,” “always looking to start World War III,” “No Honor!” “failed presidential candidate,” “nasty,” “choked like a dog” and “so easy to beat!” Those nicknames were all bestowed upon Sen. Lindsey Graham, who has since become one of Trump’s strongest Republican apologists and defenders (although he has been less supportive of recent presidential decisions— or not).

I suppose calling the President of the United States a clown is disrespectful, but I am still respectful of the office and the democratic process, even as I see them being manipulated in front of my eyes with barely an audible outcry from Congress and constituents.

Clowns don’t tell jokes. They get their laughs by willingly making fools of themselves. It may or may not be intentional, but our Clown Prince is certainly up to that task.