It’s Getting Tougher to Say what We Mean

It’s Getting Tougher to Say what We Mean 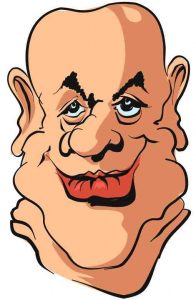 Is that your head or someone’s misshapen big toe? Just one letter can change meaning.

The political landscape is getting crazier and crazier, but is it crazy in a good or a bad way? Are facts important to you— such as the things people actually do and say— or do we really have the option of alternate facts? How about the alternative of optional facts?

My recent blog about the overwhelming evangelical support for President Trump was a case in point. Steven Strang, publisher of Charisma, an evangelical magazine, calls him a “baby Christian” but, nevertheless, an “instrument of God” ordained to set our nation on the right path. Don’t worry. I’m not getting into that again, but all the examples I presented from the mouths of white evangelical leaders were dismissed by some as liberal Democratic fiction. If so, the fiction came from their ultra-conservative Republican mouths, not my imagination.

So I’m sort of following up on a topic I wrote about some 10 years ago, which is more about the words we use, and how we can mean two opposing things with the same word or expression. I started out with the following paragraph after encountering a well-meaning reader who was definitely old school when it came to grammar and language usage:

Every once in a while I run into a language purist who likes to take issue with stuff I have written as being wrong-headed or just plain wrong. These are people who think you shouldn’t use words like “stuff,” as I just did, because it is lazy. Find the definitive word, they’ll lecture, because stuff means unspecified things.

Still, there are times when stuff is the right word, even when talking about my writing, because it is a hodgepodge of information, reflection, facts, opinion and, yes, occasional BS.

By the way, how long is a while?  If I do something just once within that span, is it a lot or a little? That’s the thing about the way we use and abuse language. It’s driving me crazy, which is not to be confused with insane. The chief synonym for crazy is “mentally deranged,” which is the same as insane, but I meant it as about the fifth or sixth dictionary definition down, i.e. “intensely annoyed or irritated.” But it may also mean “infatuated” as when you are crazy in love. You might even mean something is odd or eccentric when you say someone has some “crazy ideas.”

So if you think the president is crazy, are you saying he is mentally ill, annoyed, infatuated with himself, overly enthusiastic or maybe just a tad eccentric?

As for facts, it has been suggested that, like drunks leaning on lamp posts, they should be used for support and not for illumination. It has also been noted that facts and statistics can be used to validate both sides of the same argument. So we can say, in light of the ongoing pandemic, that the death toll supports an argument that (1) masks and social distancing haven’t worked or (2) they would have worked much better had we responded expeditiously instead of downplaying it. These facts, whatever side you stand on, seem to be anchored to political agendas, which is crazy (as in annoying) because politics and facts are clearly incompatible.

Anyway, language changes, and the word “momentarily” is now commonly used to mean in a moment or soon. The purist will tell you it means for a brief period of time, and when something happens momentarily it doesn’t happen for long. I can be a purist myself, because I have a problem with people saying that something is taking place presently when they mean currently. Presently means what momentarily has come to mean—soon.

Then there is “transparent,” which is being used all the time nowadays. It used to be that you could see right through transparent people, as in transparent liars whose deceptions were obvious. Now it means just the opposite, as in candid and open. So transparency can signify two opposing meanings. It can mean both shameless and forthright.

I remember writing about a hanging in days of yore and that a murderer ascended the scaffold “to be hung.” He was actually hanged, which is the only time that word is acceptable. So if someone is hanged with minimal suffering, is he well hung?

I confess to my own language laziness, but I’m now ready to dwell on some of my own pet peeves. Let’s start with people saying they are nauseous when they are really nauseated or feeling queasy. A person who is nauseous is literally someone who is making others sick. Everybody seems to be using nauseous in this way and, frankly, it is making me sick. If I am nauseous, I am sickening. If I am nauseated, I am sick.

Okay, like a bout of nausea, I got that out of my system. I feel better now.

Some of the stupid things we say wouldn’t be said if we really thought about them. I hear people saying things like their political or religious beliefs have changed 360 degrees over the years. They mean they have radically changed, but what they are really saying is that they haven’t changed a bit. Three hundred and sixty degrees is a full circle or back to where you started.

That’s the same as the quantum leap that is supposed to mean a great distance, usually applied metaphorically. But in physics, a quantum is about as small a change as you can possibly measure. In fact, the words quantum and leap don’t even belong together. How about a quantum nudge?

If you are loath to do something, it is with reluctance. If you loathe something, you despise it. I don’t know about you, but I’m loath to loathe anything, because it is just another negative thing to deal with.

Then there is nonplussed, which is commonly used to describe someone who is tranquil, calm or serene. What it really means is that you are in something of a quandary, baffled and perhaps unable to proceed. As it turns out, the dictionary publishers, as with nauseous, are allowing the commonly misused meaning to creep in as an accepted definition. My online reference dictionary allows a back-up definition of “cool and collected” for nonplussed. It seems that if a lot of people misuse a word, it becomes preferred and the original, pure meaning is on its way to being forgotten.

Sometimes you use a term for years, perhaps even as a cliché, and you don’t realize it is a distortion of the original meaning. The expression, “you’ve got another thing coming,” is a mild threat that originated from an expression that essentially means you’ve got a lot to learn. It originated from an old witticism, I recently learned, that stated: “If that’s what you think, you’ve got another think coming.” So think was changed to thing. We all use it and it makes more sense in conventional usage, even if it doesn’t mean the same.

This list goes on, but the following are examples of one small word, maybe just a letter, can changing the meaning of an expression. For instance, some say people reap what they sew when they mean sow, have hairbrained ideas when they are actually harebrained and portray blonde kids as toe-headed instead of tow-headed.

Of course, if you do a lot of sewing, you might reap a slew of mended socks. Your brain may be topped by hair, but the ideas generated there might be “cwazy like a wabbit,” in the words of the immortal Mr. Fudd. A head might be shaped like a toe, minus the nail, but the “tow” in tow-headed refers to the light color of flax.

I confess I fall into an occasional trap myself with this tricky language, but it keeps me on my toes, which have no resemblance, I hope, to my hairless head.