Is Our Love Affair with Cars Near Its End?

Is Our Love Affair with Cars Near Its End? 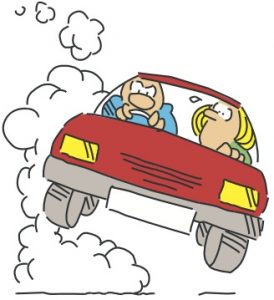 The worst things about cars are some of the drivers.

Electronic Music impresario Gary Numan remains a one-hit wonder in the U.S. with “Cars,” his Top Ten hit from 1979 quoted above. That song is already a relic as I contemplate the future of the American automobile.

The automobile itself is drastically changing. Instead of stepping on the gas we’ll be stepping on the, what, current? That’s right, electric cars are already gaining popularity. More like, part time electric at this stage. But auto manufacturers are predicting that motor vehicles are expecting to go totally electric by 2035. If Ford says it’s going to happen, you’d better believe it.

I’m probably going to go hybrid, as in part-time electric, with my next car purchase, though a bit wary about going all the way. By the time this all comes to pass in another decade or so, I’ll probably be too doddering to be granted a license anyway. Then again, cars are already starting to drive themselves, so a computer will be doing all the work. They’ll even have to come up with the excuses when stopped for speeding. My only responsibility when that day comes will be to decide where I want to go— if I can still remember where I am. But that’s another story.

I find it interesting that two states— Missouri and Massachusetts— required a license to drive a car five years before Henry Ford manufactured the first Model T. And yet, more than two decades later, with several million of the Tin Lizzies on our nation’s roads, you could drive without a license in more than half of these (make that those— 48 of them) United States. Henry Ford himself did not get a driver’s license until the age of 56, some 11 years after his Model T’s started coming off the assembly line.

No, Henry was not breaking the law, because his home state, Michigan, despite being the hub of automobile production, did not require driver’s licenses until Mr. Ford was issued his in 1919. The Model T was unveiled in 1908, but automobiles were being driven before the turn of the century, compliments of inventors like Karl Benz. There couldn’t have been many cars on our roads— or what passed for roads at the time— when the first two states required licenses in 1903.

Most driver’s licenses distributed well into the 1930’s did not require passing a test. The good news is there were no long lines at the Department of Motor Vehicles— if there was even a DMV in your state at the time. There were no speed traps and probably not much speeding anyway due to lousy unpaved roads. If you were going to drive a car around much in the early days, you had to be something of mechanic. Tires were not reliable on the rough and rutted roads so you required skills beyond changing a tire. How about removing the inner tube, patching, replacing and inflating?

Getting your driver’s license has been a rite of passage for decades. You might even say a necessity for rural teens if they want anything resembling a social life. From the 1950’s on, we have been a car culture, and it all started when we were sixteen and seventeen years of age. Well over half of sixteen-year-olds in this country had driver’s licenses in the 1960’s. Fewer than 25 percent of those that age had a driver’s license or in the process of getting one in 2014, according to a 2016 study by the Michigan Transportation Research Institute. The same source tells us that the numbers of people between the ages of 20 and 24 with driver’s licenses have dropped by more than 15 percent between 1983 and 2014. The drop since then has been less precipitous.

Could it be that our love affair with cars is on the wane?

Teenagers, especially boys, knew their cars starting in the fifties. They’d talk about cars a lot. They would woo their first dates in their cars. They were so into cars that they could order and receive food without getting out of them. The waitresses in such places were known as carhops. It continued through the sixties when I joined the car culture. We watched movies in our cars and cruised around in them for no apparent reason except to spend what little money we had on gas. Guys with the coolest cars were revered by the rest of us who had to borrow the family sedan or an unreliable backup car— if we could afford one with money borrowed from Dad or saved from our summer jobs.

Some of our favorite songs were about cars, especially in the sixties:

“To get the traction I’m ridin’ the clutch. My pressure plate is burnin’ that machine’s too much…”

“She’s ported and relieved and she’s stroked and bored. She’ll do a hundred and forty in the top end floored…”

There aren’t a whole lot of songs about cars anymore. Car karaoke was a big thing for a while, and that’s all about singing in cars and not about cars. I know that getting your driver’s license is still a big thing with teen boys and girls in rural Pennsylvania. Yet the more sophisticated cars have become, the more of a financial burden. Other than our homes they are still our greatest investment, including insurance and maintenance.

The last car I bought was priced higher than my first house.

The car culture hasn’t died out. It’s just different. It used to be romantic. Now it’s utilitarian. It used to be about freedom and escape from the mundane. Now it’s just another debt to assume. It won’t be long before they’ll be driving themselves as technology accommodates our demands for safety and convenience.

Things change, and cars are just another technology we’ll increasingly take for granted. After all, who would have imagined 30 years ago that we’d all be walking around mesmerized by our own phones? Who’d have thought that, aside from driving while intoxicated, the worst thing you could do behind the wheel was driving while distracted? Distracted by what? Your phone, of course!

Nowadays, with our gas-powered vehicles, there is always a gas station down the road. Can I trust the same if I have to plug in and charge up? Will I be able to pull into a stranger’s driveway and ask if I can borrow a wall socket in his garage? How about running an extension cord into his living room?

Going green, saving the world from air pollution, is definitely worth a try. An engine powered by internal combustion sounds a little dangerous when you think about it. The end of driving, as a mode of travel and exploration, is not something to which I look forward, but it will be interesting to see what technology and innovation has in store for us.