“Is It All Right If We Sing Some Christmas Carols?”

“Is It All Right If We Sing Some Christmas Carols?” 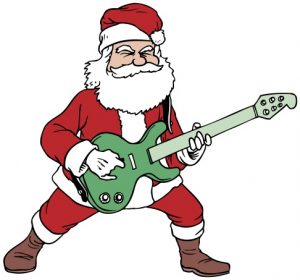 Even a rockin’ Santa can fuel Christmas spirit during this  holiday season of the pandemic.

The snow was starting to pile up last Wednesday evening — a prelude to the storm that was to dump almost two feet of snow at our particular location and at least another foot elsewhere within our rural county. A large SUV pulled up in the driveway and we could hear the excited voices of children and the trampling of footsteps on the front porch. Opening the door to the wintry world outside we encountered a small group of children in the company of a pair of adults. It was my wife who opened the door.

“Mrs. Skillings, is it all right if we sing some Christmas carols?” one of the kids cheerily queried.

How could she resist? In this holiday season of the pandemic, we expected to forego such things until, hopefully, the Christmas of 2021. The falling snow must have inspired them to convince their moms that the time was right to nudge some of these old fogies into the Christmas spirit. Mary recognized one of the two adult chaperones as one of her former students, which was probably the reason for their presence there that night. I had grumped a bit when I first heard the clamor outside, but the singing of three or four carols soothed me to the point of almost welcoming them in for cocoa or cookies. Oops! Couldn’t do that, even with masks, but their joyful spirit had worked its magic.

Carols and songs celebrating this special holiday— a time of giving and caring—run contrary to sheltering and maintaining our distance. Tidings of comfort and joy are relegated to Zoom! sessions, even, in many cases, with members of our own families dispersed in sundry locations and locked into their own lives. It did get me thinking about Christmas carols and some of my observations back in the day when my newspaper column wasn’t viewed as a Communist manifesto.

Not all Christmas songs are regarded as carols, or so I’ve always believed. I assumed “Grandma Got Run Over by a Reindeer” didn’t fit in that genre, or anything by Alvin and the Chipmunks or even Hall & Oates. I’ve always believed Christmas carols are religious in nature and somehow connected to the reason for the season— the birth of Jesus Christ. The other qualification is that they are old. Make that ancient. You know, “Deck the Halls” is a popular Christmas carol but it is not really religious and is not among the hundreds of offerings in my Methodist hymnal. But “Deck the Halls” is very old, supposedly going back to the 16th Century, and you’re sure to sing it when you go caroling. It’s a spirited song with a joyous theme and, for Christians, there is no happier time of the year.

Caroling, by the way, is not the same as wassailing. Yes, it involves singing and going from house to house trolling the “ancient Yuletide carol,” but it originally meant popping in on neighbors and consuming prodigious amounts of alcohol during the so-called Christmas season. The drinking came first and the caroling came later, and the two seemed to go together. Christmas spirit and Christmas spirits are not so much different when you think of it that way.

Now, it seems, I’ve been wrong all these years. The modern definition of a Christmas carol is a song “whose lyrics are on the theme of Christmas and which is traditionally sung on Christmas itself or during the surrounding holiday?” So that means the song, “O Christmas Tree” qualifies as a Christmas carol, even though it is about a tree, a symbol of Christmas, and not about the actual birth of the Christ Child. Plus any song with a verse or chorus that starts with “O” gives it some religious credibility, as in “O Come Let Us Adore Him.” That would qualify “Santa Claus Is Coming to Town” as a legitimate Christmas carol because it is a song of the season about a mythical symbol (Don’t tell the kids!) who embodies the message that “it is more blessed to give than to receive.” I’m not sure that’s the message children have been learning as they sat on Santa’s lap and recited their lists of what they expected under the tree, but they’d be doing their share of giving soon enough.

The first carols were not about Christmas or even Christian, my research reveals. They were pagan musical homage to the winter solstice, which, of course falls very close to our Christmas. It involved dancing in a circle and singing songs of praise to the shortest day of the year. Apparently, life was so tough during those ancient times that the shorter the day the better. It is believed the ruins of prehistoric Stonehenge was the scene of such pagan rites.

Reasons for the Timing of the Season

Now most of us know that the Bible never told us the actual date Jesus was born, though there are all kinds of theories and calculations trying to prove or disprove the December 25 date. Nine months after the observance of the Annunciation on March 25th, when Mary learned she would give birth to a holy child, is December 25th, and that has held as the Biblical explanation. It is also very likely that the winter solstice celebrations had a lot to do with the holiday falling where it does.

Getting back to Christmas carols, Christianity’s most revered holiday may have been influenced by ancient pagans. Both were fueled by carols of celebration. The earliest non-pagan carols were about the Christmas story and many varied greatly with what we know from the Gospels. It was really before there was a Bible, but the common thread was Jesus and Mary as central figures— the earliest known carol of this nature going back to the early 1400’s. The singing of these carols was actually banned in England in the mid-1600’s, with a rebirth of popularity in Victorian times, including the public singing of songs celebrating the season.

Three of the oldest carols that have survived include “Good King Wenceslas,” “I Saw Three Ships” and, perhaps the most moving of all, “Silent Night.” The last is my personal favorite, with “O Holy Night” coming a close second.

But the most popular Christmas song, as defined by a single recording, is “White Christmas.” It is more about harking back to simpler, happier times than it is about the real meaning of Christmas. It is about glistening treetops, sleigh bells, Christmas cards and, most of all, snow. But that’s okay, too. It gets you into a contemplative spirit and a chance to reflect on what’s really important.

Nothing can get you in the spirit more effectively than the singing of Christmas carols. As for one of the most reverential carols— “O Holy Night”— it was written by a poet and winemaker who seldom attended mass at his local cathedral. Yet, how can you not be moved when you join in a congregational singing of:

“A thrill of hope the weary soul rejoices/ For yonder breaks a new and glorious morn!/Fall on your knees; O Hear the Angel voices…”

It is what Christmas is all about, reassuring us that we still have the power to inspire and bring out the best in each other during a special time of the year. After going through a year and more of seeing the worst in each other, I think devoting the dwindling days of 2020 celebrating the best in each other in long overdue. The children, who so desperately want to joyfully celebrate another Christmas— and you only get so many before childhood becomes a fading memory— deserve at least that much.