Getting a Step Ahead of the Running Boom

Getting a Step Ahead of the Running Boom 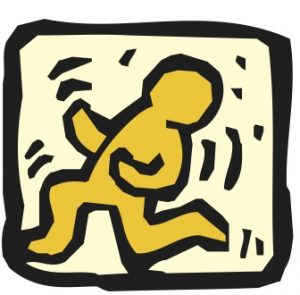 Where were the real Camptown Races? This version making its own history.

I grew up in Camptown, PA, and was there when this strange concept of people running through the woods for several miles was devised as the theme around which to build a community event and fund-raiser. When I say I was there, I should point out I was just a kid, but like everyone else in the village I had a job to do. It might be helping clear a woodsy trail for a racecourse that followed the creek on one side and then sent runners along old, rugged logging trails through the hillside woods on the other side.

One of my jobs at the first few events was to help run the games and competitions for kids, which included classics like the three-legged and sack races. There was also a greased pig contest in which elusive oinkers sheathed in a lubricant were pursued by mostly children — a contest guaranteed to ruin their clothing. Ditto for the greased pole atop of which a twenty-dollar bill was attached for someone who could shimmy up to the top and claim the prize. The key was to rub your clothing with dirt to gain the necessary traction to make it to the top. The SPCA, perhaps the local humane society, apparently stepped in to stop the inhumane porcine pursuit. The greased pole, too, was subsequently removed from the fun and games, much to the relief of exasperated parents.

Nevertheless, the Camptown Races became a tradition of food, fun, entertainment and friends and family getting back together, with the run as its centerpiece. It has struggled through recent years but is undergoing a revival for this year’s running on September 11.

The first Camptown Races were held in June of 1965, and none of the schools in Pennsylvania’s rural Bradford County even had cross-country programs at the time. Across the border in New York State, in the Binghamton, Elmira and Corning areas, they did compete in cross-country, and a lot of those young runners started coming to Camptown to try out this demanding course that was billed as being five miles long, like in the Stephen Foster song.

After years of running it, they discovered it was closer to seven miles, and to comply with the P.I.A.A. for sanctioning Pennsylvania high school teams to count it as an event on their schedules, it had to be cropped to 6.2 miles, the 10-K distance.

The beauty of the Camptown Races was that it was ahead of it time. Taking a cross-country race and making it a foundation for a community event drew a lot of attention, along with a few skeptics. The impetus, of course, was the song, and what was felt to be an historical link to our Camptown and not the ones in Ohio and elsewhere, which have also staked claims as being THE Camptown of song. We know Stephen lived in nearby Towanda with his older brother, William, chief engineer for the short-lived North Branch Canal, and attended school in the Bradford County Borough of Athens, where he wrote his first published song, the Tioga Waltz. We also know that he was familiar, through his brother, with Wyalusing, an important location on the canal following the Susquehanna River. Then there was this horse race (horse-and-buggy) where they ran from Wyalusing to Camptown on a muddy, rutty road which happened to measure about five miles in length.

Now there were no doo-dahing ladies or gents sporting pocketsful of tin gathering along a racetrack as some may imagine. I mean, the combined distance of the three Triple Crown race tracks is only four miles. This was a race from one town to another on an existing road that was far from being paved. The start of the aforementioned race was at a Wyalusing tavern in the Middendorf Hotel where entrants apparently signed up their buckboards and horse-drawn wagons, perhaps tossing down a few strong drinks to sustain them for the dash to Camptown. Research tells me that the procedure for such races, due to the narrowness and demands of the road, was for each rig to start a few minutes apart. The driver would be handed a ticket with the starting time, with his time recorded at the finish line in Camptown.

Then there is the claim that Camptown should be plural, because there were places called “camptowns” that were early versions of housing developments in the Jim Crow South where black laborers would draw a crowd by racing their workhorses.

As for my Camptown, there would have been no foot race there had it not been for the song and a theme it was almost impossible to ignore. The idea of recruiting people willing to run that distance over such rugged terrain 56 years ago was also daunting, but they did coerce a few local lads—no more than 20—to do it that first year. Nike had not yet developed the running shoe, and the photo of the original group at the starting line showed most of them in high-top sneakers and one or two in the old work shoes we called clodhoppers.

Camptown Races: Not Unique for Long

It is a story in itself that the Camptown Races came to be. The tiny town became a big attraction for runners, drawing 200 or more at its peak within a decade after that first race. We lost some of those New York State runners when the Binghamton Press started sponsoring a 10-K run there in the 1970’s. By this time the running boom had begun, and Nike got into the market with the Waffle Trainer, which became the model for all running shoes to follow. Lots of people were running to get in shape now, and they were interested in competing in races—some just to finish at a respectable time and lay claim to having conquered the course.

Then came 10-K and 5-K races all over the region and country. That means the Camptown Races were no longer so unique. Flooding of the Wyalusing Creek and other factors shifted the first half or more of the course to the hard top road, which altered the bucolic character of the race somewhat. The two-and-a-half miles in the woods on the backside are still what makes it so distinctive.

A dedicated corps of runners still comes to Camptown, but the numbers aren’t what they used to be. In 2005, the word went out several weeks before that the races might not be held “due to lack of interest in organizing it.” However, the threat of dissolution brought out enough volunteers to keep it going and, surprisingly, with more than 100 runners, it was one of their best turnouts in recent years. The numbers have been dwindling again since 2010, but there is a revival of sorts this year with an energetic team, including some new faces, out to bring back the community experience it once one.

These Camptown Races may have been borne from a familiar old song, the village’s major claim to fame, that would be regarded an inappropriate today. But there were no racial overtones in featuring this theme for a community gathering. This version of the Camptown Races is really all about a village of a few hundred people making its own history by celebrating itself and bringing folks together. I can’t think of a better time after a year that has mostly kept us apart.