Get Over the Anger; Get on with What’s Left in Your Life

Get Over the Anger; Get on with What’s Left in Your Life 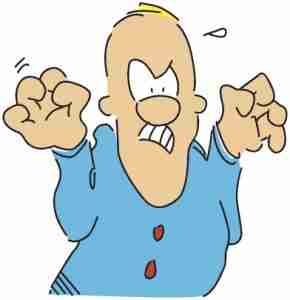 So much to be angry about and so little time.

Okay, everybody. I just want you to tune in and mellow out, as they said in the commune before it was time-shared into a condo. Take a few deep breaths and count to ten. Now tell me, as calmly as you can: Why are we all so angry?

Why all the sputtering and spitting? Have things really reached such a sad state? How is it that we’ve become the Whining States of America?

Life is unfair. That’s the complaint— the same parents hear from their kids all through adolescence— and that unfairness has to be blamed on someone. Anyone but us. Pick the person or institution to blame and that builds up a reservoir of seething anger. What’s fair? Is it fair that guys my age were starting careers, either by avoiding the draft or claiming one of many deferments, and I was in Southeast Asia hoping to survive my year in a war whose complexities I didn’t understand? Did I think of those I knew who had died there and wonder if their sacrifice was fair after we pulled out of that war? I thought about it a lot and still do on occasion.

Anger and resentment are burdens I don’t want to carry around. When you look closely at the zigs and zags of your own life, it’s easy to feel deserving of all that has gone right and resentful of all that has gone wrong. So much of it is the luck of the draw and the compulsion is to blame someone or something— the government, Wall Street, godlessness, minorities, people on welfare, your parents, bad breath, the IRS, gun violence or gun control. We have all been victims at one time of another, or see ourselves as such, and you either move on and learn from it or stockpile it in your arsenal of anger.

It’s crazy, because the evidence shows that the better we have it as a society, the more embittered we feel when that promise seems to fade.

“If you believe that things should get better and better, then it is infuriating when they do not,” according to a 2016 Time magazine cover story during a notably angry year. “In many ways, modern life is indeed better than it has ever been in the past. Report after report reaffirms this improvement.”

And still the anger grows.

So what is it we are so angry about?

Are we angry because we don’t have to worry about feeding our children, just keeping them alive every day, as is the case in the embattled Ukraine whose views of democracy mirror ours?

Are we angry because the threat of terrorism, at this point, is just that, and we don’t have to worry about suicide bombers every time we venture into a public place? Maybe we’re angry there seem to be more terroristic acts committed by gun-toting Americans than by declared enemies of the United States.

Are we angry because we can’t afford to go on the vacations the guy up the street gets to take twice a year?

Are we angry about the burden placed upon us by our aging parents whose nursing care is gobbling up our inheritance?

Well, I’m tired of everybody being angry. I have been guilty of perpetuating the dark cloud of anger myself, but, aside from standing up for things I believe in, I will do my best not to do that anymore. I have to remind myself why I am so fortunate to be an inhabitant of this place at this time. For starters, there is something called freedom, which we, as American citizens, have enjoyed longer than any other nation in recorded history. Even this is threatened by people we, or people like us, have elected, but anger will only impede not resolve.

And we have this remarkable diversity— something that makes some of us angry— but it is really extraordinary and uplifting to see so many races and religions, an assortment of colors, making us the most inventive and creative culture of our times.

We’re Still the Country that Reaches Out to Others

Who is quicker to pitch in and help out our neighbors during times of disasters? Americans have this thing for traveling hundreds of miles to help people we don’t even know who have lost their homes and need to rebuild their communities. We even provide aid and comfort to those with whom we disagree politically as we put our anger on hold. And, of course, what country is the first to jump in to help disaster victims elsewhere in the world?

We have so many opportunities, if willing to take the risks, to achieve unbelievable success as entrepreneurs. We also must assume the risk of losing it all. All in all, it allows us to be adventurers in a world where adventure is a romantic notion of the past.

And we mustn’t forget the economy— so buffeted by anger from all sides. It’s not complicated. We actually have one that provides services and comforts to its citizens. You might not able to say that were you an Algerian, an Ethiopian, a Greek or a Tasmanian. It wasn’t so long ago, in what was basically an agrarian society, we worked until we were too feeble to do it anymore. Now we’re customarily spending the final two or three decades of our life in the magical world of retirement.

That brings us to aging, which is a major source of anger out there. The longer lifespans we get to enjoy, the angrier we are about the limitations of aging. Some grow old graciously and others kicking and screaming, mad as hell that we’re not as young as we used to be and envious of those who we see as young, healthy and enjoying life.

So, in this phase in my life, I have better things to do with my time than carp and complain about all the things I don’t like around me. I am reminded of how fortunate I’ve been. When my mobility was threatened, I got a reprieve on an active life with a bilateral knee replacement. When I was declared a diabetic and was consigned to daily blood testing and medication, I was able, through diet, exercise and a more positive approach to my lifestyle, to escape that downward spiral and to return to a drug-free existence.

At my stage of life— “three-quarters of a century” as my sister-in-law recently reminded me—any of a number of bad things can happen to collapse my healthful existence. The same is true from my wife of 54 years (as of February 1) who is in optimal health for someone her age. Mary and I treasure our good health and do our best to retain it, but we don’t wait in dreading anticipation for something bad to happen. It will eventually, and I hope, when it does, anger and resentment won’t prevail in our lives.