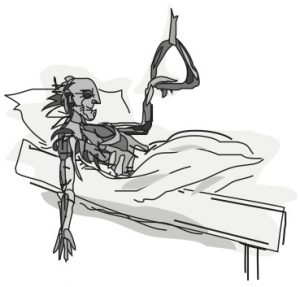 Sleeping is great. Just don’t sleep your life away!

I like sleeping. There, I admitted it. I’m tired of being ashamed of what is actually a noble pursuit and something at which I excel. It’s not that I sleep more than everyone else, but I do it so well and hate to give it up in the morning.

One learned 17th Century author, Sir Thomas Browne, compared sleep to a death that we experience daily and, like death, it is something from which we may never emerge. You know the childhood prayer “if I die before I wake” is not something that makes you look forward to sleeping. As Browne said, “I dare not trust it without my prayers,” and that is a jaundiced attitude toward a wonderfully enjoyable experience. Sleep is regarded by many as a waste of time, as in look at all you could accomplish in a day if you didn’t have to devote a third of it to sleep.

Then there’s that old English proverb: “Six hours for a man, seven for a woman, and eight for a fool.” At the same time, we are continually advised to sleep eight hours a day for good health. Just don’t tell anyone you do it. Being able to enjoy sleep is something I inherited from my mother, and I feel it is my duty to carry on the family tradition.

“If I die before I wake” is not something that makes you look forward to sleeping.

Some people don’t enjoy sleep. Others don’t have to sleep much and can function at a high level with just a few hours of it. An even greater number can’t sleep without medication, but wish they could. It’s like everything else. You don’t appreciate its value until you can’t attain it.

Well, I can attain it and always have been able to attain it. Even as I limp into the twilight years of life, I still love to sleep and still do it well. It turns out I don’t sleep any more than most people. I just do it better. Everyone has to be good at something, you know.

I grew up in a home with a father who always arose at some ungodly hour and, in fact, was usually up and gone to work before I stumbled out of my bed. He worked long hours, came home tired and was usually in bed a couple of hours after supper. If it weren’t for weekends and vacations, I wouldn’t have seen much of him at all growing up. My father loved the early morning hours. Dad died back in 2011 and Mom the year before.

He was the morning person and my mother was the night person. Her best part of the day was the late night, and that is something I came to share with her. She was not perky in the morning, which was fine with me, because I find perky people hard to abide before I am fully awake, a process that takes me at least an hour, and at least two cups of coffee, to achieve.

I grew up a child of a mixed marriage—a morning person with a night person—and my marriage is the same. Mary is a morning person, though she tries her best to restrain from perkiness before 8 a.m. My energy cycle, in contrast, takes some time to shift into gear, and my perkiness is more apt to arrive after 10 p.m. Again, I honor my wife’s lack of nocturnal perkiness by not being too disruptive after she starts dozing on the couch sometime around 9 p.m. Like the marriage of my parents before us, ours works amazingly well, thank you. I think of it as balancing each other out. One of us is always at the ready whatever the time of day.

Except when we’re both sleeping.

And we’re both good sleepers. It’s just that she starts earlier and I finish later. As it turns out, we both sleep about the same number of hours. The difference is that she rises at six in the morning, and she’s up and at ‘em, basking in that precious solace that early morning provides her. Whereas I am just getting into my best sleeping when she arises. I usually get up an hour or two later, but only because I have to. The best part of the day for me is that brief interlude before I get up, when I’m in and out of blissful consciousness, knowing time is running short and I will have to face the trauma of wakefulness. Time seems to stand still during that brief comatose state and I actually believe I could do this all day. Just give me one day to sleep, please.

There are some downsides to sleeping in…

Of course, I have learned from experience that if you do sleep that extra hour or so, you feel worse and a tad guilty for the wasted time.

Most of my life I resented not being given the gift of morning alertness, if not perkiness. Why was it so hard for me to get up and going in the morning? It wasn’t fair. It wasn’t a huge problem when I was a kid. I didn’t even realize I was abnormal.

That started the summer after I graduated from high school when I got a temporary job working at the Sylvania plant in Towanda, where my Dad worked as a department head. I never once got up with him at 5 a.m. to sit and talk about the upcoming day before we left for work at 6:30, or whenever it was we left.

I was content with being awakened, sneaking in another half hour of sleep and then barely getting up and ready in time to depart. Sometimes I even managed to grab a bite to eat. I compensated by eating late at night, a habit that pursued me most of my adult life and which I blamed for perennial porkiness.

Anyway, one morning, I was shaken awake by my mother who was urgently exhorting me to “Get up! Get up! Your father is leaving!” Indeed, he was already in the car and warming it up. Somehow I managed to make it to the car before he backed all the way out of the driveway, but I felt the shame of being a late sleeper. He never said a word to me during the half hour drive to work, which made me feel even worse. I don’t know if he would have really left me that morning, but I never overslept again.

There are still times when I wish I could be bright and alert early in the morning, but I am no longer ashamed of it. I can do it when I have to and, as it turns out, I’m actually quite good at getting up very early when I have to. If I have to rise in the wee hours, I don’t even need an alarm clock to get up and going.

I just tell myself that Dad is backing out of the driveway.