Coming Remotely and Virtually Together

Coming Remotely and Virtually Together 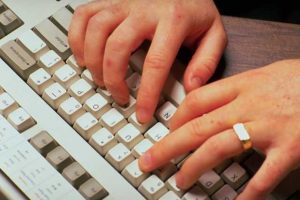 Your child’s access to bringing school into your home?

I confess. I was one of the old cranks who pooh-poohed modern parents who bowed to arming their tweens and teens with smart phones, tablets and other devices that allowed them to inhabit the virtual realm. I reasoned, unreasonably I suppose, that they: 1. were afraid of being branded bad parents by their adult peers; 2. didn’t have the backbone to just say no their kids’ materialistic demands, or 3. were far too concerned that their progeny wouldn’t be popular with their own peers.

Of course, my kids were both in college before the internet became such an intimate part of our lives. Our daughter, Pam, went off to matriculate at NYU with a state-of-the-art IBM Selectric computerized typewriter in 1989-90. Our son, Jeremy, went to Carnegie Mellon four years later where, amazingly, there was internet access in their dorm rooms and they were able to utilize on-campus computer clusters. He didn’t have a computer of his own at the time to access the internet, but his roommates did. Between their willingness to share and the on-campus computer availability, he was able to meet class demands.

I wasn’t even aware of his need at the time, because he adapted to his circumstances.

I didn’t have to succumb to those parenting pressures when they were still at home. Now I have a seven-year-old grandson who has been familiar with websites, social media and search engines for some time now. He has regular supervised access to the digital devices he has known all his young life, and that is an advantage when it comes to living and learning in the midst of the COVID-19.

As of Monday of this week in New York City, he like millions of other students— from preschoolers to collegians— will be staying home for their lessons through the process of remote learning. The number of closed K-12 school districts alone is approaching 40,000 and still climbing as I write this. Oops! Make that half of all the kids in the country. I can’t keep up.

It is something that would have been unimaginable even 10 years ago on such a scale. It’s not going to be a cakewalk today, but it is do-able if we can surmount some obvious hurdles.

Working at home is also much more common and practicable— something else that wouldn’t have been possible in the ancient 1990’s and into the early 21st Century— and allows parents to more easily handle the burden of stay-at-home students in the household. My research tells me that almost one-third of “married-couple households” have at least one parent who stays at home, including those who get paid to do it. However, there are many more households that don’t have the luxury of a parent being home to watch the kids. Then there is the threat of losing the jobs they have because of the impact of social distancing, self-quarantining and the impact of a stagnate economy.

Remote learning could very well get us through the damage wrought by the closing of our schools to stem the tide of the virus. It is going to be a challenge to keep children out of school for weeks, even months, and not feel the impact.

Home schooling is not the rarity it once was, and there are so many more options other than your local public schools, including charter schools, private schools and online schooling.

Now we’ve got students by the millions continuing their studies at home. We’ve got more parents staying at home and away from work— some who may not have work to return to if this goes on too long. There won’t be much relief outside the home, because even though we are all in this together, we are discouraged, even prohibited, from being together because of the contagion among us.

We should credit our states, local governments and school districts for taking the lead on this. Our local school district, as rural as it may be, is offering the remote learning capability this is necessary to get through this without leaving children behind in their educations. For instance, students have been allocated Google Chromebooks. They have been an affordable godsend, according to the Mobile Nations Network’s Jerry Hildenbrand, “because they are a welcome option for frustrated, underfunded school districts.”

There are still barriers to overcome, including, in no particular order:

√ Interaction among children is important in the development of social skills and learning how others think, as well as their strengths and weaknesses. Will Zoom, Skype and other tools fill that gap?

√ Our best teachers are not necessarily lecturers. They get up close and personal. Kids will miss that aspect of the classroom experience.

√ The younger they are, the more adult supervision they require. That means parents or other adults will still have to be physically present to keep them on task.

√ Students lose the vital outlet of extracurricular activities, which is great for morale, companionship and learning to work and play together.

√ Not all kids have access to broadband internet in their homes, especially those in low-income families. A surprising number have access to smart phones— if not their own, at least one in the household. Many will be sharing the classroom experience with siblings on a solitary phone.

√ Special needs require special attention, and that will be tough to duplicate in a virtual classroom.

One of the meanings of virtual is “a product of the imagination.” Children with or without learning disabilities need something real to hang onto. “Remote,” of course, means “from a distance,” but it also means “far removed in relevance.”

It us up to us to keep learning and living in this spring and summer of discontent from becoming impersonal and irrelevant.