Chasing the Jabs with a Screaming Bladder

Chasing the Jabs with a Screaming Bladder 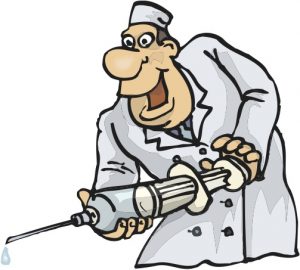 A little needling about chasing the jab.

Let me just start by saying that my wife, Mary, and I, being in declining geezerhood, both received our first jab of the COVID Moderna vaccine last Tuesday. I had to drive about 350 miles to accomplish that feat, which is like driving from my house in the George Washington Bridge and back with more than half of it on two-lane roads. I don’t think I was ever more than 60 miles from home on that journey. It required logistical planning because we had appointments in different places 40 minutes apart and more than an hour’s drive from each other.

I’m not complaining, mind you. In fact, I am grateful that we have a daughter-in-law who was doggedly committed to making sure we received our COVID protection by conducting an exhaustive online search from her home near the Jersey Shore for vaccine openings in our region. It seemed almost an impossibility to line up jabs for the two of us in our rural county, and, as I reported a few week ago, I did make sure I was among the first on the list of my local pharmacy which was among those in the state who will be allotted a limited number of doses at some point. What that point will be, even they don’t know. It could be weeks, most likely months, before that happens.

In the meantime, I had done what I could do and wasn’t all that concerned about it. We are both pretty healthy for being well past the summit of the proverbial hill. In the meantime, we checked the usual places just in case something came up.

Now I’m not one to believe in conspiracies, but I did come to the conclusion that getting an appointment in my county, even with our age group at the top of the list, required at least one of the following: 1. knowing somebody with access, probably a physician or other healthcare professional, to pull strings 2. monitoring every conceivable website providing public health information 3. spending your waking hours in places where vaccines are administered and hoping for no-shows or 4. storming vax centers in bullet-proof vests while waving Trump flags. Maybe I got the last one mixed up with something else.

I even did the online thing through eGuthrie in their last appointment round for 65-and-older. I was there as soon as the virtual starting gate sprang open at 8 a.m. and was shut out from more than a dozen shot slots I tried over a multi-day appointment calendar. I was notified within an hour that all (several hundred) were taken. Stay tuned and keep trying, I was advised.

Alas, last Tuesday we joined almost 78 million Americans, including 2.89 million Pennsylvanians, who had received doses by that time. Our second jabs won’t come until March 30. In the meantime, the single-shot Johnson & Johnson vaccine has been off and running for more than a week now and we’ll be achieving herd immunity (not to be confused with herd mentality, an altogether different issue) before you know it.

Back to our triumphant saga on joining the legions of the vaccinated, which included a lot of stress and a bladder on the verge of bursting as I sat stuck in traffic at the entrance of I-81 with time running out on my scheduled COVID jab. Mary doesn’t drive, and that’s another story, but I just wanted to clear that up before the following narrative.

So Weis Market pharmacies are among those scheduling vaccinations in Northeastern Pennsylvania and Karen (aforementioned daughter-in-law) found two openings in two different Weis locations. Mine was scheduled at a Weis Market in Dallas at 10:50 a.m. and Mary’s in Honesdale at 11:30. The two markets are a drive of an hour and nine minutes from each other, according to MapQuest, so the only practical way to do this was for me to drive to Honesdale first with Mary waiting about two hours for her jab. That would give me about a 15-minute cushion to get to my appointment in Dallas. That shouldn’t have been a problem because about 30 miles of that leg were on four-lane stretches of highway so I figured that could pad my cushion, so to speak. I’m cruising along and my GPS arrival time is 10:32— 18 minutes before my appointment. I’ve consumed about a half-gallon of coffee by this time and, as I’m nearing the entrance of I-81, I see traffic stopped ahead. They’re not moving and I’m sitting, my cushion draining away. To complicate things, my bladder has shifted into ardent protest that could result in a drain that could imperil the cushion I’m squirming upon. There’s nothing I can do about answering that call, other than performing in plain sight with the prospect of my dilemma being captured for posterity on multiple smart phones. It was clear that painful denial would take precedence over going viral and the prospect of being remembered as “that old guy taking a leak.”

I can see obituary now after the opening paragraph.

Skillings is best remembered for relieving himself on the approach to I-81 in Wayne County as hundreds of disbelieving motorists looked on. Despite an abject apology for inappropriate behavior, the daring urinator was subsequently asked to resign his membership to AARP.

The stress and discomfort grew, but the traffic remained jammed. The cushion (not the seat cushion) is dangerously close to dissolving, and, communicating via text with my son, I get the phone number for the Dallas Weis Market. I’m hoping I can save the appointment if I report my predicament. I make the call and I am pleasantly told the pharmacy, though in-store, is a separate number. She cheerfully gives me that number and, as I am about to make that call, I see the traffic starting to move. The cushion isn’t there anymore, but I have a chance of making it now. It is a painful journey, with the stress building and bladder screaming, my pace retarded by lane-clogging trucks for the first few miles. At some point, lanes start to open up and I become that aggressive driver I usually find so obnoxious passing on the right and left. The GPS tells me I might make it after all as I exit the interstate approaching Wilkes-Barre. I’m getting closer and closer through several traffic lights onto the Dallas Memorial Highway and, after negotiating a roundabout, I’m within a mile, a half mile, a few hundred feet and then those glorious words, “Your destination is on the right.”

I drive another mile or so just to make sure it’s not further up the road.

I pull over and tap grocery stores on the GPS screen and then Weis Market. It takes me back the way I came, but this time, when it says, “Your destination is on the left,” it really is. I realized I unknowingly passed it before by paying too much attention to the GPS. I’m close, just a few minutes late, when I arrive at the in-store pharmacy. I take the form to fill out on a nearby bench, and in order to avoid an embarrassing scene (News item: “Elderly Man Escorted from Grocery Store in Humiliating Display of Incontinence”), I take advantage of a nearby restroom.

All goes smoothly from there. The pharmacist, cordial and professional, schedules my second shot for 5 p.m. on March 30th and says, “By the way, we’ll still give you the shot even if you aren’t here right on time. If you’re going to be real late, just give us a call.” Nice to know.

So I drive back to Honesdale, where Mary had been killing time reading on a store bench after her appointment. We did stop for a relaxing lunch at a COVID-cautious Applebee’s near Scranton, occupying a disinfected booth close to the restroom just in case.

My bladder is still complaining.