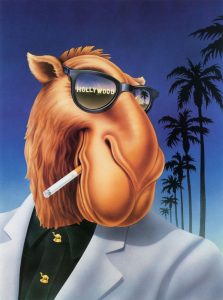 Camels were cool in the old days and reportedly the favorite bad habit of doctors who would walk a mile for one.

As a member of the jingle generation, I have all kinds of stuff cluttering my mind. Blame it on TV commercials— the most pervasive purveyor of advertising slogans and jingles. I had a good time with this subject a few years back, and some bear repeating— along with a few others in this updated version. Many are still stuck in my aging brain, and there are generations of us still suffering from this crippling mental impairment. Why do I still need to remember that a Big Mac is comprised of “two all-beef patties, special sauce, lettuce, cheese, pickles, onions on a sesame seed bun”?

I’m not the only one. There are millions of us who can’t get this stuff out of our heads, and the numbers are growing with successive generations. That’s why ad slogans and jingles are so powerful. Whether it is “You Deserve a Break Today,” “Have it your way” or “Just Do It,” these pithy commercial appeals are taking up valuable brain space that may have accommodated Shakespearian sonnets or all those important memories I no longer remember.

These slogans are pure Americana and go back a long way. Budweiser was dubbed the “King of Beers” in the late 1800’s. “I’d Walk a Mile for a Camel” was a tagline introduced in 1921 when the hook was that “nine out of ten doctors smoke Camels.” Wheaties was proclaimed “Breakfast of Champions” in 1935, and KFC chicken was advertised as “finger lickin’ good” in 1952. Jingles are essentially slogans set to music, and the honor for the first commercial jingle to be broadcast goes to Wheaties in 1926 for a forgotten ditty with the lyrics: “Wheaties— the best breakfast food in the land” that debuted on Christmas Eve of that year, going viral on radio nationwide before viral meant what it means today.

If you look more closely at some of these slogans, you can see they often seem incomplete. For example, a Hallmark slogan was, “When you care enough to send the very best…” I might add “… but not enough to think up your own words.” Another example? There’s the classic from De Beers, which should have gone like this: “A diamond is forever… and so are the payments.”

You get the picture. I can give you a few dozen more examples, thanks to my amazing retention of crass commercialism. It’s not great art, but there’s a certain genius in coming up with jingles and slogans that capture the imagination. Following are some products, their slogans or jingles. Some rest in peace in the ad slogan graveyards and others are fairly recent or still used. My suggested completion is in bold italics.

Timex—“It Takes a Licking and Keeps on Ticking”… but not when it’s freezing or your tongue will be sticking.”

Philips—“Let’s Make Things Better … and then we can raise the price even higher.”

Johnny Walker—“Keep Walking … if you didn’t bring a designated driver.”

Lay’s Potato Chips— “Bet You Can’t Eat Just One …because that’s all we put in one of those little bags.”

Reebok—“I Am What I Am … I’m Popeye the Sailor Man.” (If you’re under 40 that probably doesn’t make any sense.)

Nike—“Just Do It … after you take out a second mortgage for a pair of our running shoes.”

Sara Lee —“Nobody doesn’t like Sara Lee… She was voted least unpopular.”

Jell-O— “There’s always room for Jell-O … except for the moldy stuff in your refrigerator.”

Budweiser—“When you say Budweiser, you’ve said it all… Need we say more?”

McDonald’s—“Did somebody say McDonald’s? We tried, but we already said it all with Budweiser.”

Coca-Cola— “I’d like to teach the world to sing in perfect harmony… Just waiting for you to put that soda down.”

Target—“Expect more. Pay less… Unless somebody hacks your bank card!” (Target did have a major problem with hacked accounts not so long ago.)

Smith Barney—“We make money the old-fashioned way… We earn it. …Or we get absorbed in another merger.” (Smith Barney partnered with Citigroup and then was taken over by Morgan Stanley.)

Nissan—“Life’s a journey. Enjoy the ride… Just make sure you bring a gas can and jumper cables.”

Verizon Wireless— “Can You Hear Me Now? … Yes. Now shut up!” (This particularly irritating ad campaign was mercifully ditched around 2015.)

Radio Shack—“You’ve got questions. We’ve got answers… You just won’t understand what we’re saying!” (Nobody could make you feel dumber than those Radio Shack guys back before hundreds of its stores went out of business.)

U.S. Marines— “We’re looking for a few good men … Not that there’s anything wrong with that.”

Revlon—“Feel like a woman… unless you want to be one of those few good men.”

U.S. Forest Service— “Only you can prevent forest fires… So stay out of California!”

Tylenol—“It’s hospital recommended… and so are those expensive tests your insurance won’t cover.”

New York Times—“All the news that’s fit to print … plus a whole lot that isn’t.”

Michelin—“Because so much is riding on your tires …you might want to join Weight Watchers.”

Lending Tree—“When banks compete, you win… When they can’t, you pay for their bailouts.”

Ford— “Drive One… was the cleverest slogan we could think of on short notice.”

Smirnoff— “Exclusively for Everybody… who wants to wake up in a hotel room the next morning with no recollection of how they got there.

Long John Silver’s— “We Speak Fish… because our employees are still learning English.”

Exxon (formerly Esso)—“Put a tiger in your tank… but don’t tell the SPCA.”

AT&T— “Reach Out and Touch Someone… or you can just call them on the phone.”

FOX News—“Fair and balanced … for all our friends on the far right.”

CNN— “The most trusted name in news … except for all our friends on the far right.”

Avis—“We try harder… and that’s why we’re so trying.”

American Dairy Council—“Behold the power of cheese …To hell with cheese. Got milk?”

L’Oreal— “Because You’re Worth It… or maybe because your face has more pock marks than a country road.”

Electrolux— “Nothing Sucks Like an Electrolux… and our products have really sucked for a long time.”