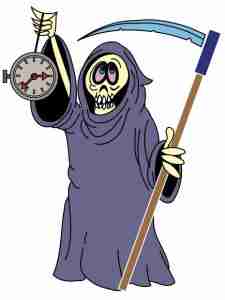 Cheer up! We’ve always got death to look forward to.

Sometimes we get so caught up in the mean spiritedness of politics and man’s inhumanity to man, which is one male chauvinistic expression feminists don’t seem to mind, that we lose our grasp on humanity and the shared assets and liabilities that make us more similar than different. We cringe through morning updates on the slaughter of innocents in the Ukraine as we brave the tirade of insults, exaggerations and fabrications of those campaigning for our votes in the next election.

We care more for the unborn we’ll never get to know than for those who walk among us. Social media has turned us more unsociable that ever, fueling contempt for those who think and believe differently than we do.

Some of the following observations were written some seven years ago in the middle of Barack Obama’s second term and when Donald Trump was best known for firing people on a reality television show. I don’t really want to write about any of the aforementioned menaces that greet us every morning as the spring of 2022 struggles to emerge. It seems that even spring is reluctant to show up this year. We can’t even ignore the bad news, because who knows what might happen when we’re not paying attention? At this point it doesn’t seem to matter who is at fault, because we can’t agree on that either.

That’s why I’m going back in time here to a subject I have tackled before. That’s right: death and dying. We can’t avoid it so we live with it through humor or keep it at bay by pretending it is something else or a fate much desirable than anything in life.

There are just a handful of things all human have in common, and one of them is we are all going to die. Death may seem a negative subject but in remembering we keep those alive who have passed on. Barely eleven years ago, both of my parents were alive and relatively healthy. But Mom passed away and Dad, missing her terribly, was gone a year later in the spring of 2011.

The parade of the deceased has marched steadily by since then—most of them from my Dad’s generation, but a growing number from mine along the way. We all think of death, hoping we can keep it at bay with a healthier lifestyle or counting on our superior genes to give us a few more quality years.  Few of us want to die, but we all fear the ravages of old age that may be tormenting us and a burden to our loved ones.

We prefer to laugh at death, keeping it at a distance for fear it rubs against us. Diminishing the last cold grasp we will ever feel before shuffling off this mortal coil is accomplished through dark humor and euphemisms. You may have noticed I have already used a number of those cushioned words and phrases that have become substitutes for death and dying—passed on, departed and shuffling off this mortal coil (strife and suffering of daily life).

There is no word more euphemized than death. Make that euthanized, because we are striving to put that word, signifying stark finality, out of its misery. As a newspaper editor I scratched my head at the outrageous avoidances of the word in obituaries. It’s as if by not saying death, died and dead that we have somehow defeated it.

If I bother to leave my own obituary behind, I shall say I died on such and such a date and hope that whatever else is mentioned is brief and to the point. Maybe by that time I will have accomplished something deserving of a paragraph or two before launching into my survivors and funeral arrangements.

But I am getting ahead of myself here—way ahead of myself, I’d like to think, because I wanted to tell you some things I hope won’t be stated in my obituary to describe my passing:

—Don’t say I went to my final resting place, because I like to believe the soul lives live on forever and mine will be immersed in an active lifestyle, er, deathstyle, for time immemorial;

—I don’t want to go to the sweet bye-and-bye, because when you get to some place bye-and-bye it’s a rather circuitous route. Let’s get there and do what has to be done—unless it’s a final resting place and then I wouldn’t mind dawdling a bit.

—I don’t want to buy the farm, kick the bucket or cash in my chips, but I prefer it to something sanctimonious like singing with the angels or tending the garden of tender mercies. Not that wouldn’t mind being embraced by winged cherubs, but it seems a little presumptuous to predict in an obit. I’m not much of a gardener, so count the tender mercies out. I can sing a bit, so I wouldn’t mind a gig with an angelic band, assuming classic rock is acceptable.

If I become deceased, joining the legions of the dearly departed, I pray my expiration date allows me to turn mellow like fine wine instead of souring like old milk. If my plug is pulled and I go offline for good, I may find myself in the Elysian Fields listening to the fat lady sing. Then I will know it is time to pay the piper—or whoever is accompanying the fat lady—and will gracefully lay down my life and join the mortally challenged in eternal rest. There I expect to make new friends, perhaps meeting the reaper himself or hitching a ride with the grim ferryman. Maybe I can even cheer him up before we get to the other side?

I suppose, after I answer the last call and awaken to life immortal, I may pay a visit to Davey Jones’s Locker, though I’ve never been big on ocean excursions. My number may be up and I may be tapped out, but I’ll only be down for the count as a mortal, for my soul—or so I have been promised—will live on. I will be giving up the ghost, freeing the spirit, after St. Peter answers my knock on Heaven’s Door, but a new beginning is not a bad thing, even if it is redundant. I shall then be on permanent vacation, as they say, having breathed my last and surrendered to the big sleep. (Apparently breathing is not required while awake or asleep in Heaven. If it is, it could be Hell.)

Some might say that when we have answered the call, it is like pushing up daisies, becoming worm’s meat or shitting the bed, but that is only if you don’t believe in the immortality of the soul and are convinced your ultimate destination is toes up six feet under, returning to dust, snuffed for good or trapped forever in a dreamless sleep.

Should the day come when the curtain falls and you cease to exist, joining the ranks of ex-persons, remember you have arrived at that last refuge and have finally reached the proverbial journey’s end.

Wherever you are, take a good look around, if you are able, and I will make this one guarantee. It is not going to be like anything you’ve ever imagined.

For all of the living, I bid you a happy, healthy and prosperous mortality. For those who have embarked into that good night, I wish you a glorious eternity and condolences to those who loved you.