Are Conservatives and Liberals Really So Far Apart?

Are Conservatives and Liberals Really So Far Apart? 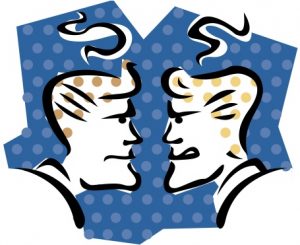 The truth is that a conservative Republican is no further to the right than a liberal Democrat is to the left.

The typical liberal Democrat and conservative Republican in American politics are actually moderates, as hard as that may be to believe in these divisive times— one just to the left of center and the other just off to the right.

Picture a ruler and the inch markings one to twelve. From the nine-inch mark to the end are the various elements of those on the radical right. That’s the Nazis, Ku Klux Klan and even more ultra right-wingers. The left edge of the ruler to the three-inch mark are in the radical left, with communists and revolutionaries in the Mao. Trotsky and Castro mode. Many insurgent cults choose the communal model of the far left with one god-like leader.

Quiet moderates pick from both the left and right, occupying an inch or two in the middle, so most conservatives and liberals aren’t really so far apart on that scale.

Conservative Republicans see socialism and communism as interchangeable, but are careful about labeling someone a communist after the extremes of the Joseph McCarthy hearings in the early 1950’s that took the perceived “red scare” too far. His campaign against homosexuals is not as well-remembered. The red baiting McCarty who served in the U.S. Senate was obviously a conservative Republican in its most dangerous guise, but he was a Democrat until the age of 36. The Democrat-to-Republican transition is something he shares with President Trump. Both found it easier as Republicans to move middle America by exploiting their fears of those among them, whether it be Russian spies or illegal immigrants.

I got to thinking of this after viewing a television commercial for a candidate Pennsylvanians saw (and elected) on our May 2019 Primary ballots. “There are those who say we go the socialist way with the Green New Deal,” it says. I took it as saying that people supporting the tenets of the Green New Deal, a proposed economic stimulus package taking aim at the impact of climate change and our dependence on fossil fuels, are socialists, a.k.a. communists. He uses terms like the “radical socialist agenda” of the liberal Democrats and their “insane socialist agenda.” This congressional candidate’s vow to “never back down” is the one attitude we don’t need with a Congress whose two governing parties can’t agree on anything. Will someone please back down and start making compromises for the good of the country?

I find it irritating, to say the least, when conservative candidates define liberals as communists, unhinged and radical lefties. I would feel the same way if a Democrat were to describe Republican opponents as Nazis, on the radical right, racists and anti-Semitic to exaggerate their conservative leanings.

People who care about our abuse of the environment and its dire consequences are not socialists. The Russians and the Chinese with their socialist agendas are certainly not taking a lead in dealing with climate change or the pollution of our air and oceans. Russia, in fact, is just starting to regulate carbon emissions.

There is one connection between the New Green Deal and communism, and it has more to do with the economic equality part of it, which is essentially a hope to narrow the huge gap between our richest and poorest.

Take note of the following definition, the most repeated version I’ve found on the internet:

Communism and socialism are economic and political structures that promote equality and seek to eliminate social classes. The two are interchangeable in some ways, but different in others. In a communist society, the working class owns everything, and everyone works toward the same communal goal.

Of course, our Declaration of Independence recognizes equality, even if just for men, but it is an equality of individuals and not classes.

I’m not so sure why climate change became a political issue. I think science has more than adequately proven its existence, substantiated by the Intergovernmental Panel on Climate Change and the November 2018 Fourth National Climate Assessment. The one thing we do know is that we humans, including communists, fascists and capitalists, got us into this mess in the first place. It’s never too late. Cleaning up our environment is the right thing to do, and there really isn’t anything political about it— except in the process we’ll need to get it done.

Going back to the candidate I quoted before, I offer his defining message: “Say no to socialism and yes to the American Dream!” That will motivate some voters, but what does it really mean? If trying to save our planet is rejected as socialism, the American Dream will fade into a living nightmare—the shameful legacy of those of us who had a fleeting chance to do something about it.