A Strange Little Word with So Many Issues

A Strange Little Word with So Many Issues 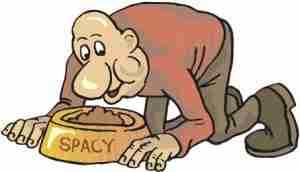 Chowing down while the dogs fight over a bone of contention.

I’ve spent of good deal of my life dealing with words. We all use them. At least all of us who speak or write, but even illiterate people, who may not know how to spell them, use them, and people who are unable to speak or hear must think them. I think about words and how they came to mean what they do. You use them all the time but there are those rare occasions when you pause to question why it means what it means or sounds the way it sounds. It’s a word you’ve written hundreds, even thousands, of times, but there is that moment when doesn’t look quite right.

It happened with the word “issue.” It was automatically issued from my brain and through my fingers to the keyboard. My four typing fingers stopped cold.

“That can’t be right,” I said to myself. It sounds like a sneeze and looks like something is missing. I looked it up and it was correct. Now I was a bit frightened, as if I was discovering an early symptom of something incurable. Would this start happening with other words until every one I wrote or read looked unfamiliar, foreign?

Could this be the onset of senility? Maybe it was early Alzheimer’s, which is itself a word that looks a little weird. Then I remember it is some guy’s last name, and there are some goofy names out there— many of them pronounced nothing like the way they look.  You know, why doesn’t iron sound like it looks.

When the familiar suddenly becomes strange and alien, it can be scary. It’s a typical plot twist in horror movies. Some likeable, seemingly harmless character turns out to be the serial killer hacking off heads in college dorms. That’s sort the way it is when words and names you write and say just about every day seem, even briefly, otherworldly.

But those odd withdrawals from reality are fleeting and aren’t regular occurrences. That means I still have time before I descend into babbling idiocy. Not that there is anything wrong with being an idiot or a babbler. Where would politics be without them?

And speaking of odd names, occasionally upon seeing my last name in print, it looks very strange, as if it didn’t belong to me. It’s that “illi” part in the middle, I suppose, with the “S” at the beginning and the “s” at the end. On the other hand, it’s sort of cool to have “skill” as part of your name and not so cool for the “kill” part. Were I ever arrested for murder, the newspaper headline writers would have a field day— “Cops Nab Skillings for Chilling Thrill Killings.”

Getting back to the issue at hand—the word, that is. Its temporary strangeness got me to take a closer look. You see, we use the word a lot. I have used it a lot. An issue is a problem that is not being resolved. That’s an original dictionary definition as a noun. There are issues in contract negotiations, usually revolving around what is fair to both sides. Once it is resolved, it is no longer an issue. If it continues to be unresolved, it becomes a controversy. But it remains an issue. There are often strong opinions surrounding issues, but only agreement will make an issue go away. Even though politics, government and religion seem to be awash in issues, most of us use the word in a lot of other ways that seem to have nothing to do with its original meaning.

Putting Out Issues in Print and Parenting

For instance, I spent a good part of my working life putting out issues. Not that I ever resolved much of anything, but as an editor for weekly and daily newspapers, every publication was an issue— in more ways than one. I guess it came from the verb, which means to give out something, and eventually one of its meanings became “to publish.”

One of its earlier meanings, bordering on biblical, was a quaint way of describing your offspring or immediate descendants. That’s right, your children are your issue. You might say, not so quaintly, they are the issue of your loins. Sounds a little creepy, but you can blame Shakespeare from whatever mental picture that evokes. I’d say the male in the issuing equation has the best part.

But the word is tacked on to just about anything that represents a problem.  Just the other morning, I apologized for missing a message by explaining that I’ve been having “email issues.” There are marital issues, drug issues, communication issues and anger issues. They all seem to downgrade important problems into something that isn’t really your fault. What would you call having problems with your kids? Why issue issues, naturally. If your children are antisocial, belligerent or continually in trouble, it’s just easier to say they have issues.

Your issues are your scions and progeny and heirs, oh my! If you issue something, you may disseminate, circulate, dispense or disburse. You can have an issue with something that could be an argument, a question, a concern, a matter of conscience or a bone of contention, which describes dogs fighting over a bone and dates back to the early 1700’s before the advent of Alpo and Purina. Despite the tremendous strides we’ve made in dogfood development and production over three centuries, dogs still fight over bones.

An issue may be a controversy, something that is problematic, unsolvable or a can of worms. They did have worms in the early 1700’s but cans? Not so much.

It’s going to be a difficult word for me to exile from my vocabulary, because it is so utilitarian. It is tempting to use, in the opinion of Joseph Epstein, essayist and author, because it denotes “a happy vagueness” that insulates our flaws and failures from closer scrutiny. An issue doesn’t have to be a good or bad thing. It’s just something that happens and something you have to deal with.

That’s the cool thing about words. They have a certain presence and character, but the downside is that many of our favorites have become so commonplace and used in so many ways they become, well, just words. I expect I’ll slip up and use that word now and again, but, from now on, I’m not going to make an issue of it.