A Pair of Republicans Worth Emulating

A Pair of Republicans Worth Emulating 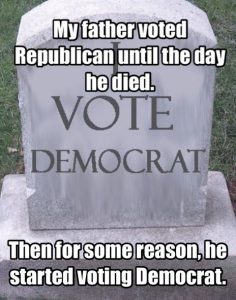 As the charges of voter fraud run their course, some party loyalists have stood their ground.

I can’t think of a time when so many people — people who regard themselves as patriots are as distrustful of our democracy as today. Having a president who fuels that mistrust to the extent where supporters view everything around them as a conspiracy is certainly a big part of it. The election has been portrayed as a massive fraud with the perpetrators ranging from various foreign countries to the Democratic National Committee to the manufacturers of voting machines to humanitarians like Bill Gates who are out to control our minds through whatever flu serum is foisted upon us.

Whatever we might feel about politics and some of the manipulations on the fringes of the law, snubbing the Constitution and abusing executive privilege, the bottom line is that we have to believe in the system, imperfect as it may be, to continue to function ethically and fairly. We can amend and adapt through legislative and constitutional channels by those we’ve elected to do so. It is a matter of following and trusting the law, appreciating and learning our own history and remembering that democratic countries very much like ours can turn to fascism or communism on a dime under extreme conditions.

We remain a citizenry firmly entrenched in our opposing beliefs and truths. All of Biden’s calls for unity, working together and appreciating our freedoms as Americans have fallen on millions of deaf ears. The divisiveness will not magically go away, as the president predicted of the coronavirus months ago, and partisanship may well sabotage attempts to get anything worthwhile accomplished over the next four years.

We’ve become a government more concerned with blocking any gains or credit to the opposition. The result is that we’re stuck, our wheels spinning with no traction, in that swamp that was supposed to be drained by now.

Despite that gloomy appraisal, hope springs eternal, as Alexander Pope assured us three centuries ago. We have considered ourselves a nation of cockeyed optimists who, no matter how bad things get, just know things are going to get better and our states and citizens thereof will be united once again. If we can survive a Civil War over a no-brainer issue like slavery, with Americans killing other Americans to the tune of 750,000 dead, reclaiming a national spirit of unity in the coming months should be a piece of cake.

Trying to subvert American Democracy because you cannot accept defeat may seem relatively harmless in comparison, but it has exacerbated the strain and pain that became so evident in last month’s election and the weeks leading up to it. Breaking the logjam of partisanship on both sides — Democrat versus Republican and liberal versus conservative— is an important step, and I credit two Republicans as instrumental in initiating the thaw.

It’s not so much about heroism, though it certainly took character, integrity and respect for the law and the Constitution, from Judge Matthew Brann and election overseer Christopher Krebs.

Matthew Brann is a dyed-in-the-wool Republican who, not so many years ago, was the Chairman of the Bradford County (PA) Republican Committee from 1996 to 2005. Brann, a partner in a Troy, PA, law firm, was only 31 when he took over that role, leading the countywide effort to support Republican candidates in their bids for elective office. Republicans didn’t need much help prevailing in general elections in our rural county because more than two-thirds of the registered voters were — and still are—Republican.

Bradford County Republicans strongly supported Donald Trump in November 2020, leading the way in overwhelming countywide support by delivering him almost 72 percent of the votes cast for President. Now I don’t know how Brann voted, but I do know that as Judge of the U.S. Middle District Court of Pennsylvania he chose to follow the letter of the law. That is reassuring when so much attention is on courts being stacked with conservatives and Republicans throughout the country, including the U.S. Supreme Court. Not only did Brann shoot down claims of election fraud delivered on behalf of the president, but he used some pretty strong language in defense of every vote cast. His response was described in several news reports as “a blistering attack” on Trump’s lawyers’ claims of election fraud.

I know there are local Republicans in my native county who regard Brann as a traitor. I think he stood up for democracy and made a firm and resolute statement why it is important not to discard millions of votes due to unproven allegations of fraud. Brann, in his Memorandum Opinion dated Nov. 21, 2010, stated the following:

In this action, the Trump Campaign and the Individual Plaintiffs (collectively, the “Plaintiffs”) seek to discard millions of votes legally cast by Pennsylvanians from all corners – from Greene County to Pike County, and everywhere in between. In other words, Plaintiffs ask this Court to disenfranchise almost seven million voters…

Instead, this Court has been presented with strained legal arguments without merit and speculative accusations, unpled in the operative complaint and unsupported by evidence. In the United States of America, this cannot justify the disenfranchisement of a single voter, let alone all the voters of its sixth most populated state.

To disenfranchise is essentially depriving the right of a qualified citizen to vote and/or send representatives to an elected body. His opinion concisely breaks down the vague and complex arguments of the plaintiffs (Donald J. Trump for President, Inc. et al). He is one of two Republican heroes who stood out in the waning days of November. They set aside their partisanship, their respective loyalty to the party they had supported their entire adult lives, to do the right thing, which was to follow the law and, in doing so, prove themselves to be something Donald Trump has never been — real patriots.

The other loyal Republican is Christopher Cox Krebs, 43, the Director of the Cybersecurity and Infrastructure Security Agency (CISA) in the Department of Homeland Security from November 2018 to November 2020 when he pronounced the process whose security he oversaw in a CISA statement as “the most secure in election history.” He was courageously fired in a Trump Tweet on Nov. 17 within a matter of hours after the statement.

One of Trump’s attorneys, Joe DiGenova, subsequently stated, after calling Krebs an idiot and moron, that: “He should be drawn and quartered. Taken out at dawn and shot.”

When asked on “60 Minutes” on Sunday, Nov. 29, what his reaction was to a press conference by another Trump lawyer, Rudy Giuliani, declaring massive voter fraud, Krebs responded:

“It was upsetting because what I saw was an apparent attempt to undermine confidence in the election, to confuse people, to scare people. It’s not me, it’s not just CISA. It’s the tens of thousands of election workers out there that had been working nonstop, 18-hour days, for months. They’re getting death threats for trying to carry out one of our core democratic institutions, an election…”

Donald Trump and his followers have been crowning themselves as true patriots while the rest of us were somehow not legitimate Americans. We trusted our democratic system in general and the integrity of voting in particular. We are the patriots, not the doubters and disclaimers, of all the key components of American Democracy.

Consider that Hillary Clinton conceded the 2016 election the morning after the election, even though she collected 2.9 million more votes than Trump. Can you imagine the caterwauling and temper tantrums emanating from Trump had he received several million more popular votes than Biden? Who is the real patriot here?