A Man of Letters Fools Around with Acronyms

A Man of Letters Fools Around with Acronyms 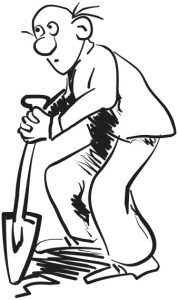 Digging up a growing glossary of acronyms.

We are flooded with a sea of acronyms, which are essentially language shortcuts. They may be organizations or expressions that we know pretty well and are usually comprised of the first letters of most of the key words used, often excluding the definite (“the”) and indefinite (“a” and “an”) articles that tie them together. That’s why most of us say or write NASA and not National Aeronautics and Space Administration. In fact, it’s not even spelled out on NASA’s home page. We use the acronym ASAP instead of “as soon as possible” and, in a world or texting and email, we don’t even have the time to write out “be right back” (BRB) or “thank you very much” (TYVM) and that all-time irritating favorite “laugh out loud” (lol). Texters may have taken humor appreciation a step too far with “rolling on the floor laughing” (rofl), which must be very hard to do while texting.

There probably isn’t a word of six or fewer letters that you can think of that hasn’t been turned into an acronym. Some of them are clever and cute. Most are uninspiring. Many go out of their way to spell a real word in the pursuit of cleverness. In fact, though there are several acronyms for CLEVER and, sad to say, not one of them is particularly clever. For instance, the acronym for Compact Low Emission Vehicle for Urban Transport is CLEVER.

It sounds like a concept in which highly educated people are involved, but they apparently haven’t mastered the fundamentals of creating acronyms. I would suggest that they join the Committee Learning to Educate Virtually Every Resident (CLEVER), which they probably can’t because I made it up.

There may be no clever acronyms for CLEVER, but you can’t say the same for STUPID. One acronym for STUPID used in job listings in certain high-tech fields is Smart Talented Unique Person in Demand, which would be someone who is quite the opposite of stupid. I feel that if you are going to use an acronym, it should be close to the meaning of the word you are forming. I propose Silly, Talentless, Unqualified, Pathetic, Idiotic and Dense as a fitting acronym for STUPID. But, then again, I made that up, too. However, it’s available if you are looking to start an organization for stupid people. No acronym hits the nail on the head more succinctly than CRAP, which stands for Cheap Redundant Assorted Products. For those weary of carefully watching where they step in public parks and on sidewalks, there is Citizens Revolt Against Poop.

Let’s start with some easy ones. How about MOM? This is an acronym for hundreds of expressions and entities, including Mind Over Matter, Mail Order Marijuana and Mean Old Man. My favorite, and also the most definitive, is Maker of Me.

POP is also a popular acronym, running the gamut from Power of Prayer to Pissed Off Person. Again, these are actual acronyms.  I think there are a lot of Moms out there who might prefer this POP acronym: Persistent Organic Pollutant.  I didn’t make that one up either.

I also didn’t make up the following versions of the acronym BARF: Books Are Really Fun, which doesn’t really make books sound all that fun, and Be a Real Friend, which could have got away with BRF. Probably the most definitive BARF phrasing is Bile and Regurgitated Food. By the way, the favorite F word used in BARF acronyms is “food.” Makes sense.

It is a mystery why any person or organization would want to be defined by the acronym for a word used frequently in the Bible and as an unflattering description— ASS. And yet there are a number of job titles using this acronym, including Assistant Shift Supervisor, and even terms with education-related ties like After School Suspension and American Students’ Society.  My favorite— and, again, something I did not make up— is Acronym Specialists Society. At least we know they are not taking themselves seriously.

There is the phrase “passing over opportunities repeatedly,” which, of course, uses the acronym POOR. I would prefer “purely out of resources,” which I did make up. And, no, I am not making fun of poverty, because I’ve been on its precipice myself.

I am also not making fun of being old when I point out perfectly respectful acronyms for OLD such as On Line Dating, Office of Local Developer and Off-Load Device. We can take it a step further with OLDER— On Line Data for Epidemiologic Research. I prefer, bearing in mind my advanced age and profession, Occasionally Lethargic Drooling Elderly Retirees. Yes, I made that up.

There are a few real organizations or businesses that proudly display logos trumpeting acronyms they probably came to regret it at some point. There was Women Take Flight (WTF), a New England air museum, and the Wisconsin Tourism Federation. Then there was a crafts store that changed its name, though not before a photo of its store front went viral. That was the Creative Oriental Crafts Kingdom — and you can figure out that acronym— which actually displayed the slogan “Try (add acronym) Today.”

Acronyms for the Geezers among Us

Do you know your aging acronyms? The AARP issues what it calls “Acronyms in Aging.” If you are 50 or older, it helps to be familiar with some of them.

In fact, if you are old enough to have elderly parents—that’s right I dared to call them elderly— there is an organization for you, Children of Aging Parents (CAP). It’s nice to be old and still be considered a child before we lapse into senility. Perhaps the most regrettable acronym for an organization serving the chronologically enhanced was the Department on Aging (DOA) in Iowa. That has since been changed to Department of Elder Affairs, which is apparently for old folks who like to (nudge, nudge) fool around.

AARP is itself an acronym for Association of American Retired Persons, but it doesn’t tell us that in its own compendium of acronyms because, like the NAACP, it has apparently dubbed itself as a word and not an acronym. We know why the NAACP prefers it that way. It’s the “CP” part of it. Otherwise, to remain contemporary, it would have to become the NAAAA—or the National Association for the Advancement of African Americans. That’s far too many A’s to digest, but it could have been even more repetitive as the American Association for the Advancement of African Americans.

And, yes, there are organizations for “Older People, “Older Americans” and “Older Women,” but few, if any, for anyone who is simply old (as opposed to old and simple). The exception is an insurance program under the Social Security Administration—OASDI, which stands for Old Age, Survivors and Disability Insurance and is unpronounceable and boring.

Being old or elderly may not be flattering, but that’s what I am if you have to stereotype me by age. I was in my early sixties when my father was still living. Did that make us both elderly or was he merely “elderlier” than me?

Now there is a word near and dear to me, which I assumed would have all kinds of clever acronyms. That would be the first syllable of my last name, which was also my late father’s nickname. (I was known as “Little Skill,” which wasn’t particularly flattering.) SKILL, as it turns out, didn’t have any popular uses as an acronym, which was somewhat surprising. I found two examples and the most interesting, if you want to call it that, is Scientific Knowledge for Indian Learning and Leadership. After some contemplation—but not a whole lot— I decided that it would be a great acronym for a dating site for homicidal maniacs. How about Serial Killers Interested in Lasting Love?

Maybe I went too far on that one.