A Children’s Lesson for a Childish President

A Children’s Lesson for a Childish President 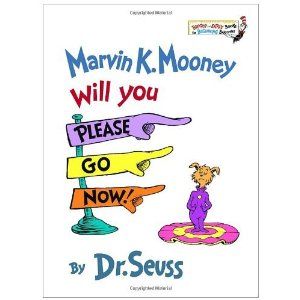 Advice for President Trump with apologies to Dr. Seuss.

It is clear our president needs another television gig. Just keep him away from debates. He hasn’t figured out that the other person —and the moderator—get to talk, too. The first debate is what it is — I mean was what it was —and I suppose Trump backers wish it wasn’t. Sometimes debates bare the ugly truth of who you really are— as if we needed any more evidence.

It was a childish display by a brat and bully who has never been told no, throwing a tantrum and breaking all the rules. It took me back to my son’s childhood and one of his favorite Dr. Seuss stories as a toddler. I can’t get it out of my head:

The time has come! The time is now! JUST GO, GO, GO! I DON’T CARE HOW! MARVIN K. MOONEY WILL YOU PLEASE GO NOW!

It is clear the time has come for Donald J. Trump to go— PLEASE? But that will be up to the voters in about a month from now. He may refuse to leave even if he loses. I’m just trying to help him make a career choice in the event that happens so he can go with his head held high.

I’m thinking the president’s best career move would still be television where he was so good at exploiting reality a.k.a. pretending to be someone he wasn’t.

I’m not sure he could make as much money as he and his family have pocketed from public service, but maybe they could revive “The Apprentice,” his last big payday. That train might have left the station, though, because we have subsequently discovered he’s better at pretending he’s a deal making billionaire than actually being one. Plus celebrities recruited as his foils might balk at suffering the indignity of getting fired by a loser.

There are so many who love Trump for that manufactured image. If you love Donald “No More Bullshit” Trump maybe you are better off letting him return to reality television, because he can’t seem to stop the BS as President. He can drain that swamp of muddy meanderings that passes for a mind, which, in his case, is not such a terrible thing to waste.

I’m only thinking of what is best for him. He really needs to get out of government and politics and do something he is actually good at.

I don’t know what that might be. He is supposedly good at building impressive things that lose money, allowing him to reap tax refunds greater than what the typical American town spends in a decade. Not sure there is a market for that talent.

He could go into sales. He’s done a pretty good job selling the United States up the river to maintain his lavish lifestyle, including major hair maintenance. We knew the itemized deduction for a $70,000 hair styling bill would be a boon for the late-night talk show hosts. There should have been a write-off for legal fees to sue the hair stylist for malpractice.

It turns out that the one big thing Trump is good at is making himself famous by creating a fictional persona. Who would have thought he’d resort to running for President— and win to boot— to regain his dwindling and swindling fame? The current persona is President of the United States, and there’s nothing fictional about that. So many of us wake up every morning hoping it has all been fiction, chanting “It’s only a dream! It’s only as dream!” only to turn on the morning news and be reminded that it is all too real.

Are we really surprised that he’s not all he has portrayed himself to be? Turns out he’s not even close to the billionaire he has presented himself as for so long. However, there are probably billions in assets at his disposal. Maybe if he sells the Trump Tower in New York, his only major money-maker, and his loser golf courses and other loser hotels, he’ll be able to pay back all the money he owes — after taxes, of course— and settle down with Melania and son in a nice two-bedroom modular near Scranton. He likes Scranton.

He is really quite good at selling fantasy. That could have led to an opening for him at Disney, but the fantasy merchants are laying off, not hiring. Word is that Goofy was seen on the streets of Orlando begging for handouts. Yes, fantasy and fiction are in Trump’s wheelhouse. There’s the one about the Chinese manufacturing the virus (you know the one) and unleashing it on the United States like a biological weapon. He’s got a bunch of people believing that. Maybe they’ll let him off the hook for shrugging off the virus for two months after he had been apprised of its catastrophic potential. Then there’s the one about imminent massive mail fraud somehow perpetrated by a cabal of Machiavellian Democrats, a.k.a. commie liberals, that will steal victory away from him with nary a Russian hacker involved. Lots of people believe that one, too, and it is still fiction.

Some argue that he must be a clever businessman for having paid no income taxes at all in 10 of the previous 15 years and $750 a year in his first two years as President— largely because he reported losing lots of money. That makes him a clever loser. Loser is one of his favorite words and he applies it to just about everyone who is not him.

He’s got hundreds of millions coming due to personal creditors—perhaps in the midst of a (shudder) second term if he wins. Hey, that’s four more years of fame. He can retire broke and famous. He could lose about a $100 million in a legal battle with the I.R.S., which is questioning the legitimacy of a $72.9 millions tax refund he collected.

Let’s stop making excuses for all his maneuvering to circumvent paying income taxes and remember that this is the President of the United States, the ultimate public servant. He has lived a lavish lifestyle for years at the expense of struggling taxpayers funding needed programs like Social Security, national defense, Medicare and social services and health care for the less fortunate. We shouldn’t give the President of the United States the same leeway as other crooks, spendthrifts and braggarts. He’s supposed to be better than that.

It’s okay for Trump supporters to let him go now. He’ll find something to do worthy of his fictional talents. There should be all kinds of opportunity for fame and renewed fortune for a former President of the United States who is pretty much willing to do or say anything. Even the largest segment of one-issue voters, pro-life adherents, won’t need him anymore. You got what you wanted from him— another conservative, anti-abortion judge. You might credit Mitch McConnell for that, but the president got the pick and the glory. Trump’s continued support isn’t reliable anyway. He was pro-choice until August of 2015 at the age of 69 when he made up his mind to run for President. You can’t trust him to hold his ground on that, so let him go.

You’ve got your judge in time for another opportunity for the Supreme Court to dismantle Roe v Wade and probably the Affordable Care Act. The legacy of Donald Trump will live on.

Let him go, please. The opportunities are limitless. Mister President. You can even, as Dr. Seuss himself suggests to Marvin K. Mooney, “stamp yourself and go by mail.” It might take a while, but it will get you there eventually.